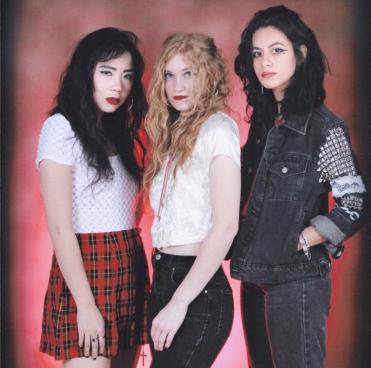 Tune in on Friday, November 16th @ 7AM to hear DJ The Pencil Sharpener's recent talk with Southern California garage rock trio, L.A. Witch, while taking in the beautiful scenery and sounds of this year's Desert Daze Festival.

L.A. Witch’s eponymous debut album tapped into the allure of warm nights on the West Coast while hinting at the loneliness and lawlessness of living on the periphery of a country founded on a dark past. The three-piece composed of Sade Sanchez, Irita Pai, and Ellie English culled sounds from the outlaws of warmer climes, whether it was 13th Floor Elevators’ lysergic rock n’ roll or the cool hand fatalism by The Doors on songs like “The End”. It’s an album transmitting subdued revelry while also smirking at the inevitable consequences of the night.

There is no better season for these kinds of songs than the autumn, when the promises of summer have abated and the nights of reckoning grow longer. L.A. Witch seized the moment by revisiting some of their early tracks and reshaping them into Octubre, a five-song EP that delves deeper into their darker side. “Because these are old songs—we don't play them live anymore but still wanted them to be heard—this was the perfect opportunity to get experimental with sounds and textures,” Sanchez says of the EP. Despite this new studio adventurism, the songs on Octubre stay true to L.A. Witch’s vintage starkness.