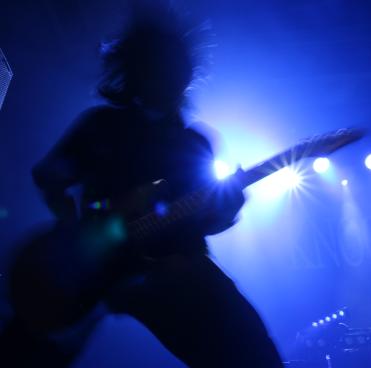 Review by Sophia Risin, photos by Brian B. Vargas.

On Oct. 25, Knocked Loose took the stage at the UC Theater with an energy that buzzed through the air. The group has lead singer Bryan Garris, Isaac Hale on lead guitar, Kevin Otten on bass, Kevin Kaine on drums, and Nicko Calderon on rhythm guitar. They are a hardcore-metal band from Oldham County, Kentucky. Their instrumentation sounds like a blend between semi-psychedelic rock and vocals that remind you that they are a band that refuse to be defined by any given genre. 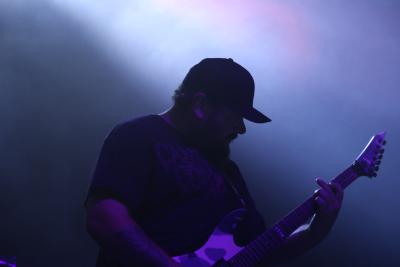 The show was completely sold out and packed to the brim. They took the stage with Sunami and Extinguish who each complemented each other’s sets in a way that could only be described as the building of a show. Extinguish had a fairly short set, but played the crowd out to “Unconquered” which had the entire crowd moshing. Sunami is a band from San Jose and known to be local legends, and their reputation is well deserved. They had the crowd surfing and running around like the lungs of the band were put ondisplay. The crowd for Sunami was almost as hyped as they were for the entirety of Knocked Loose.

After two openers setting the tone, Knocked Loose somehow exceeded all expectations. They started with an opening that couldn’t be called anything but theatric with opening sounds of “Where Light Divides the Holler.” Knocked Loose cultivated a sound of all but absorbing bass and vocals that oscillate from the metal voices screaming lyrics into sounds that are nothing but raw, untamed emotion. Garris has the ability to, within one song, go from sounding like the incantations of an otherworldly demon to higher pitched screaming that the crowd couldn’t help but echo. Watching the entire show evolve, the pit had formed into 3 or 4 separate sections at a time with sounds that swallowed you whole and gave everyone a way to scream out everything. 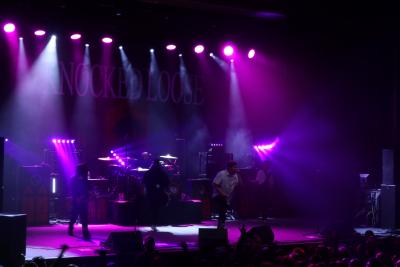 By the time their set had started to go on, the pit was closed to more people joining it because of the amount of people there. The theater was able to make sure everyone was safe while still letting people dance to their heart’s content. Metal and hardcore have a reputation for having unruly crowds and being inaccessible but Knocked Loose had the perfect balance of a show that was full of energy and bass that you could feel in your bones, while also having people around making sure that everyone was ok and having water passed out around the wings. The show was not simply the music, but the crowd, and music, and the energy generated by the community. By the end of the night, they had become one of my new favorite bands and shows I’ve been able to go to.

Jon The Reptilian
DJ Profile / Recent Show Playlists
9:00am to 11:30am
This Week's Schedule
> See More