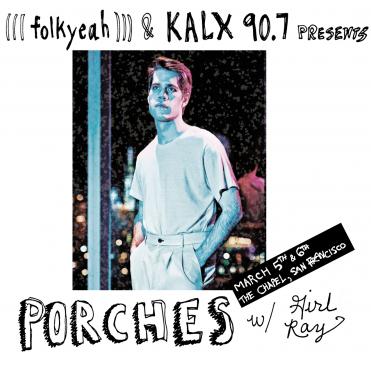 On a two-night run March 5th and 6th, (((folkYEAH!))) and KALX welcomes Porches and Girl Ray to The Chapel in San Francisco.

Porches is the synth-pop project of New York-based musician Aaron Maine, formed in 2010. "The House" is Porches' third album, released on Domino. Aaron cites the desire to document immediate sensations and diaristic vignettes as the themes that drive this songwriter accompanied by fat beats album. Excitement at the prospect of self-discovery and commitment to the process of getting there may not seem like a cornerstone of electronic music in the aughts but it sure is in 2018. Featuring contributions from Dev Hynes of Blood Orange, Maya Laner of True Blue, and Kaya Wilkins of Okay Kaya.

Girl Ray is a lo-fi and self-proclaimed girl power pop trio from London, fresh out of high school and living the dream. They have released their debut LP, Earl Grey, on Moshi Moshi in 2017.

The Chapel is located at: 777 Valencia Street, San Francisco.