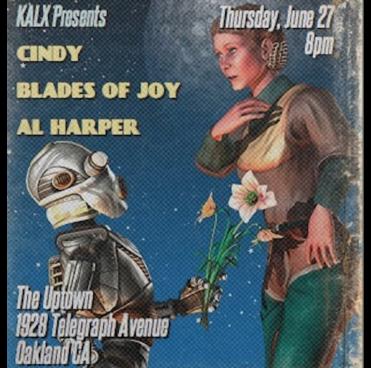 Join KALX at The Uptown Night Club on Thursday, June 27th @ 8PM for a melding of dreampop, sadrock, and post-punk as Cindy, Blades of Joy, and Al Harper take the stage for the night.
Formed in 2015, San Francisco’s own Cindy debuted their self-released and produced LP in November 2018 and bring their personal stamp of sad rock to the stage. It has charted on KALX radio as one of the 50 most played records on air for three consecutive months, topping in at #27.

Opening are SF band Blades of Joy with pop for poets, rock for reality brand of rock and neighbor in the east Oakland’s Al Harper who will drag you through a high school soap operas worth of emotions.

The Uptown is located at: 1928 Telegraph Ave, Oakland, CA

At War With Heaven
DJ Profile / Recent Show Playlists
12:00am to 1:00am
This Week's Schedule
> See More