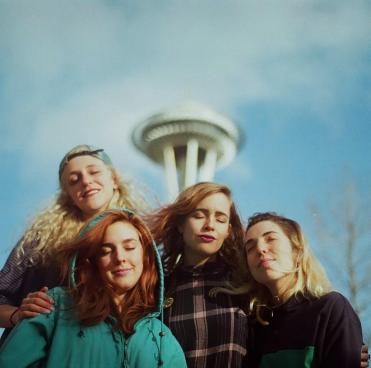 On Thursday, March 9th @ 8PM, join KALX at Rickshaw Stop for an evening with Seattle's Chastity Belt and Lisa Prank!
In 2013 Chastity Belt made their Bay Area debut with a live radio performance on KALX, playing songs from their two self-released EPs and single. They have since released two LPs, "No Regerts" (Help Yourself Records) in 2013 and "Time To Go Home" (Hardly Art) in 2015, as well as toured with Wire, Protomartyr, Deathcab For Cutie, and Courtney Barnett, among others.
Seattle pop punk singer-songwriter and failed figure skater Lisa Prank self-released her debut EP, Crush On The World, in 2014. It was later reissued by That Summer Feeling. Her excellent debut LP, Adult Teen, was released by Father/Daughter Records in 2016.
Stephen Steinbrink is a prolific indie-folk songwriter from Oakland by way of Arizona. He has recorded 8 LPs since 2007, including his latest LP, Anagrams (Melodic Records) and two self-released mini LPs in 2016.
Rickshaw Stop is located at: 155 Fell Street, San Francisco, CA.
Doors 8PM.
All ages / wheelchair accessible.