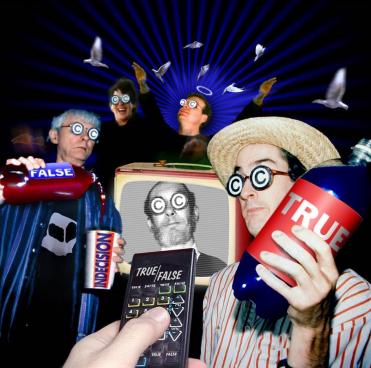 Tune in on Wednesday, January 29th @ 10PM for DJ Carnacki's late night exploration into the mind of Jon Leidecker of multimedia collective, Negativland.

Since 1980, the 4 or 5 or 6 (or more) Floptops known as Negativland, a multimedia collective originally from the San Francisco Bay Area, have been creating records, CDs, video, fine art, books, radio and live performance using appropriated sounds, images, objects, and text.

True False is their 13th studio album and Negativland’s 2019 return to all original music that you could mistake for actual songs, albeit ones being sung by dozens of sampled vocalists who have never met. The first of two interconnected double albums, “True False” tackles concerns that will be familiar to any surviving fans of the band: our nervous systems, our realities, and the evolving forms of media that inevitably insert themselves between us.

For True False, Negativland consists of Mark Hosler, David Wills, Peter Conheim, and Jon Leidecker, as well as the dearly departed Don Joyce, Richard Lyons and Ian Allen. Containing tapes from the earliest years of the band (including dozens of samples that will be very familiar to regular listeners of their radio program, Over The Edge).