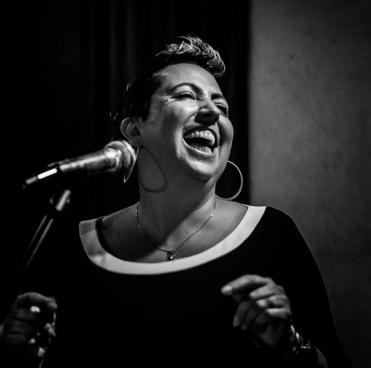 This coming Tuesday, March 23, from 9 to 10pm, Carnacki will be honouring the memory of Jewlia Eisenberg, of Charming Hostess and Book Of J, who passed away on March 11.  The centerpiece of the hour will be the re-airing of an interview conducted in January 2018, just before the Book Of J cd release show at SFJAZZ.   Also on offer will be selections from Jewlia's many various projects, which could all be filed neatly under her own preferred genre heading of Nerdy-Sexy-Commie-Girly music.

Primarily a vocalist, Jewlia came to prominence in the 1990s though the Bay Area's eclectic avant-weirdo-rock scene, with Charming Hostess proving to be one of the most vital and longest-lasting outfits of the bunch.  Across three decades, she put out numerous releases on Tzadik (under its noted Radical Jewish Culture sub-series) and the local vanguard of the peculiar, Vaccination Records.  All her music was steeped in a percolating mixture of forgotten histories, revolutionary politics, an ebullient spirit, a sly sense of humour, and her powerhouse voice that, as has been noted in one of the many eulogies, "could sing anything."

Tune in and share in the celebration of one of the great giants of music that the Bay Area was lucky enough to claim as one of our own.