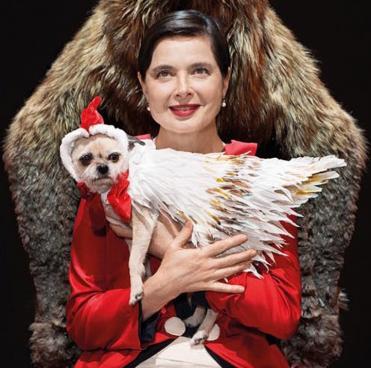 On February 6, 2020, Sonia Mistry and Chris Michel of Film Close-Ups sat down with
actress and filmmaker Isabella Rossellini to talk about her new “theatricalized lecture”
project “Link Link Circus,” her interest in animal psychology, and more.

We're here with the amazing Isabella Rossellini who's in town performing “Link Link Circus.” I thought we could get started by talking about the origins of the project and what brought about this incredible show.

A few years ago, I went back to university to get a master degree in animal behavior and conservation. While I was studying, I started writing. It's not that it was planned. I didn't go to university to do theater, but I've been an entertainer all my life, so when I was at school I thought I'd just do this to satisfy my curiosity.

The first monologue had to do with reproduction. And this one has to do with cognition. Do animals think and feel? That's the core of the show.

Going back to your decision to go to school for animal psychology, what was the thought there? You had a career going on as an entertainer, as you said. Was there any hesitation or did you just know that you wanted to learn more about animal behavior?

I always liked animal behavior and I wanted study it when I was the right age to study it, after high school. But it wasn't really a discipline that was offered in Italy where I grew up. There was biology and zoology, but not really animal behavior. And then, my career took off as a model. In general you are a model when you're very young. Then I continued as an actress.

When I hit my fifties, there wasn't a lot of work. There was no work at all as a model and very little work as an actress. That gave me time. My children also were adult and they were in college, so I was an empty nester.

Then I went to a conference by Temple Grandin at Hunter College and they were handing out a leaflet saying they'd just opened an animal behavior master degree, which I couldn't believe because this is what I always wanted to do. And so I signed up, not thinking this would open up another career. I was always curious about it, so I joined in.

They really weren't meant for YouTube. YouTube had just started. We did the short films 12 years ago. Robert Redford, who runs Sundance, he always wants to find new ways for film's expression. At the time, the shortest film you could find a commercial release for was television. Short means 20 minutes because that's a half hour television format or the hour, minus the minutes that you have to dedicate to the advertisements, or one hour and a half to two hours for theatrical release.

Redford was very nostalgic for short films like we've seen in silent movies, in early cinema. When YouTube started, it started as a platform where people put their own home movies. He said, "Well, maybe we can tell short stories." So he commissioned short series.  By "short" he meant no more than two minutes.

The people that worked and collaborated with him reached out to several people, directors or wannabe directors. One of them was me. I had done a film about my dad called, My Dad Is 100 Years Old, that Sundance had bought. That's why they reached out to me, because of that film that I directed with Guy Maddin.

Of course there's marvelous documentaries and films about animals. So I thought it was already covered by David Attenborough and the likes. You can't really do better than that, but there's just something about animals. They make me laugh, I find them funny. And I thought, maybe I can tell what makes me laugh.

So that was the original base. The genesis was the fact that these pieces are comical, whether they are short films or whether they are a long monologue format in the theater. They are generally funny. At least I hope they're funny. The intent is to make people laugh, but then to go, "Oh, I didn't know that." I always say I want the people to say "Ha ha ha... Oh." That's the reaction I would like to elicit.

Do you feel that in deciding to do formal studies in animal behavior that you kind of envisioned a new career path for yourself?

No, I didn't at the beginning. I went back to university in my fifties, so I didn't. I thought my career was finished. And I was very grateful to myself because I didn't spend all the money I made as a model and as an actress. I had created some cushion for myself financially.

Once in a while a job came, but I knew that was disappearing and I thought that they were going to stop. So it was really wanting to satisfy my curiosity. That was the engine that motivated me. I also started an organic farm. So I thought I need something to engage. But, you know, organic farm, you don't make any money.

So it wasn't really a career in the sense of something that was moneymaking. I thought I'd done my money making years with modeling and acting. When you're young and beautiful, you can capitalize on it, you take advantage of it, but then later you do something that is interesting. I was very grateful for the work that I'd had and that I hadn't spent all my money.

I didn't know when making these short films, that were really an experiment for Sundance, they would become so popular. And eventually give me more and more and more ideas, so that in the last 10 years, this has become really a full time job to write and perform about animals. So these have become great activities, not lucrative, but activities indeed.

And are you continuing to study animals and learn more about them? Or have you now switched to being an educator?

Well, I would like to continue to study. It was very difficult to study and work. The work as an actor or an entertainer, it's very nomadic. Students are supposed to go to classes, so you can't really move that much. I graduated last May, so it's not even a year, and I just wanted to give myself a year where I could work.

I had five years of so many complications in trying to attend class in New York, but also be in Los Angeles to do a series, or be in Paris for Lancôme, and still don't miss the class on Wednesday.

Then I thought I want to take a year off where I just enjoy what I do. But I would like to fulfill me. I find happiness in fulfilling curiosity, so I would like to continue eventually, but I don't know when.

Since you began the show “Link Link Circus,” has the show evolved over time since you've now completed your degree?

At the beginning it evolves because, at the beginning, you come up with ideas that you hadn't thought of before. In the beginning we worked with the Teatre Akadèmia in Barcelona. We put it together and then we also rehearsed it at the Baryshnikov Arts Center in New York where we performed it. In the first, I would say six months, it continued to evolve, but at a certain point, you cannot because there are light cues, there is video ... and so every time you make a change, there are the technicians, the video person, the light cues. At a certain point you have to sort of commit and say, okay, this one stays this way. Then if I want to say something else, I make a note so I can write another show or do a film or something else.

So it hasn't really changed much in the last eight months, but at the beginning it did change.