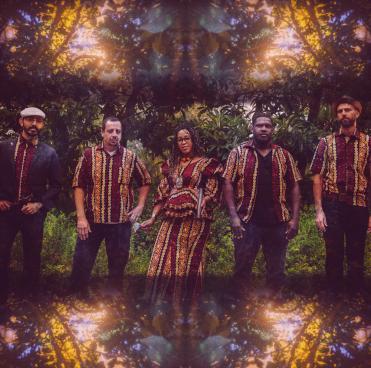 On Friday, January 13th @ 10:30AM, Jon The Reptilian interviews Mariam Diakite and Erich Huffaker of Oakland based ensemble, Orchestra Gold.  Tune in to hear about the group's new album, Medicine, and their upcoming album release party on January 20th at Bandcamp in Oakland.

Behind Orchestra Gold’s original sound is a decade-long story of knowledge, respect, and collaboration between Mariam Diakite of Mali and Erich Huffaker of Oakland.
Blending the traditions of Mali and American Rock/Funk with a retro feel, the group represents a world of powerful cross-cultural experience.

Orchestra Gold transcends borders and boundaries to be a force of healing within the community. The ensemble offers a kaleidoscope of magical sound deeply rooted in the past while boldly blazing towards the genre-bending future: African Psychedelic Rock.

With the January 2023 release of their third album, Medicine, this profoundly spiritual and dance-inducing ensemble continues their pursuit of spreading healing and community through the universal gift of music.