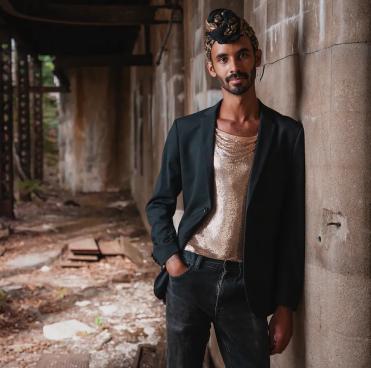 On Tuesday, November 15th @ 2PM, Sparkle Motion will host award-winning banjo player, fiddler, singer, and scholar, Jake Blount, ahead of his performance at Freight & Salvage in Berkeley the same evening.

Half of the internationally touring duo Tui, Blount won the 2020 Steve Martin Banjo Prize and is a two-time winner of the Appalachian String Band Music Festival (better known as Clifftop). His first solo album, Spider Tales was released in 2020 to great acclaim.

Blount is a specialist in the early folk music of Black Americans and a skilled performer of spirituals, blues and string band repertoire.  A scholar of the banjo and its history, particularly Black String Bands, his new release, The New Faith, is part of Smithsonian Folkways Recordings' African American Legacy Series and pays homage to Black artists who were exploited and unpaid by the record industry and sets the record straight on their astonishing legacy.

The New Faith is an Afro-futurist concept album that explores what traditional Black folk music might sound like post-climate crisis—a field recording from the future. Drawn from Black spirituals, recast and occasionally rewritten to fit into Blount’s narrative of a near-future where society has buckled under a climate catastrophe, the music of this imagined community has overtones of folk, gospel, the blues, and spirituals. There is an explicit tie-in with Octavia Butler’s visionary 1993 work of climate/science fiction, Parable of the Sower.