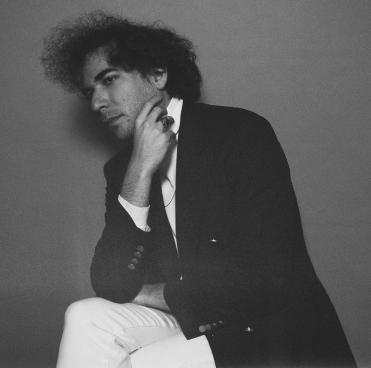 The Pencil Sharpener spoke with a possibly maybe majorly gifted guitarist heretofore known as Yonatan Gat on the shores of Lake Perris on a stormy Friday during the Desert Daze festival in October of 2018. This is what they talked about:

I am Elie Katzenson and I’m here with Yonatan Gat and Marion (a colorful acquaintance of Yonatan’s who joined us on our interview)  and we are at Desert Daze, a festival in Moreno Valley. We are watching some lightning and it’s actually very cold in this moment but during the day it was super toasty and I wanted to know how playing in the heat and perhaps even being in the desert, period, impacts your playing and your experience of playing.

Yonatan: Well I’m from the desert, I was born in Israel. That’s pretty desert. It’s pretty familiar to play in those kind of conditions.

So even though it’s maybe been a long time since you lived in the desert, it always comes back- like a muscle memory?

I want to describe the concert for the listener that wasn’t there because I think it’s very helpful to understand how you perform. It starts off as a traditional rock show, you have a sizable audience and they are passively listening. All of the sudden I hear the Eastern Medicine Singers in the crowd and I hear the drums start and I see people just flocking into the center. It turns into this thrum of people and it’s just a buzz. The audiences sees the energy change so quickly and you pop out of almost nowhere. What do you expect from the listener in that moment? Do you expect them to bring anything?

Yonatan: They always bring something right, even if they are standing and doing nothing, that’s a certain energy. There is no such a thing as nothing, nothing is something.

Marion: The search for nothing is meaningless because everything is something.

Yonatan: If they sit there and look, or if they dance, or if they look in a certain way, sometimes you feel that there is a tension and you build off this tension. The music that I play is improvised, we never know what is going to happen. We start a song and the next seven to ten to twelve  minutes are improvised, and we constantly surprise each other. That’s part of the way of touring and performing every day, just surprising each other and just playing off of each other instead of playing the same songs every night. We also play off of the audience; we don’t only play off of each other, so if we get a certain feeling from an audience, that feeling can come in many forms. Sometimes an audience is very static, but there’s actually so much tension in the room that you can cut it with a knife, and you are walking on this very very very fine line by sustaining that tension. But sometimes they’re dancing and freaking out and I like to build a show that gets all possible responses out of people. Like dancing and tension and concentration and listening and not listening and thinking while you’re listening to the music or listening to the music and being very consumed by it or getting into a trance. I like to build an environment that allows people to feel all of those feelings.

This trance idea is interesting because when I hear that deep drum and when I think people are standing in a circle, there’s a more traditional exchange of energy and I would have called that music healing. I would have said that that was a healing experience, that the call of the drum was very present. How do you react to people saying that your work is healing or that they are having a deep emotional experience?

Marion: Because sound is therapy.

Yonatan: To answer the question about healing, I think I would say that I feel the same thing when I make music and whatever you describe, it’s there. Music is an important thing, and we can easily forget why, because we live in a society painfully governed by money and different manifestations of things that people consider success. Sometimes it’s easy to forget why art is important at all and why something like music matters. It’s just entertainment for a bunch of people at some music festival? No, it’s many many many other things and one of them is healing. Music is something that people go to in times of need, in times of sickness, and also sometimes you can be healed even if you’re not sick, by being taken to a different place or by being asked a question, and that makes music important I think.

Marion: Yeah, so you can be peaceful.

You can be in your body.

Marion: You can just reside.

I was swimming out in the lake and I was looking at the sky and listening and listening through the water and I’m bobbing and I can hear it and from a distance. I still feel like I’m in the middle of the circle but I’m not.

Marion: There is no mother greater than the Earth.

Yonatan, you live in New York City and you just said that you bring the desert with you wherever you go.

Yonatan: I don’t know if I bring it but I feel it.

How do you live in a place that is so overwhelming and how do you retain what I would say is a very grounded demeanor? Calm, you feel very calm.

Yonatan: New York is an overwhelming place but it can also be a very relaxing place in your house. You get the contradiction of the two, which is something that I really enjoy. You can just step out of your house and you’re in the craziest place in the world, a place where every day is a festival, a place that has so many different kinds of music and cultures and everything fuses together. It has that energy, and sometimes I worry that it’s losing it a little bit, but still it has the power of being the most amazing city in the second half of the twentieth century it’s still there. And then you can shut yourself in your house for a little bit and it’s a completely different world, so you alternate between the two and it’s like going into a sauna before you step into a freezing ocean, or vice versa.

Yonatan: It makes you feel.

Yeah, it does... It’s interesting because your work with the Eastern Medicine Singers represents a commingling of cultures; how did you feel that you were able to work together? The balance of power seems very fair and not uncomfortable. Did that happen naturally?

Yonatan: We have my group that I perform with, and they are a group too amongst themselves. I don’t interfere with the way that they create their music and they don’t interfere with mine because it’s different. I would never do that, I respect their music too much so I think the commingling that you see is an equal power structure that results from people getting together-

-Sorry to interrupt. How did you know that you would work (together)?-

Yonatan: Because I heard their music.

Yonatan: Yeah. There are a lot of elements to their music that work really well with the kind of improvisation that I do.

Marion: And then to incorporate that we all come from somewhere else and that sound is really being brought through your body and put into realization by something you’ve never known. And then you realize that you know nothing.

We do know nothing.

Marion: What is a molecule, or a microbial or something. You’re like 99.9 percent nothing and then on the other side of that you’re something, and you sit back and think about that. What is that? I’ll spend my life and my death thinking about it, because when I transition (out of life) I’ll think about my death as well.

Divinity, for you, where does that happen?

Yonatan: Well I guess I believe that it’s everywhere. Some things manifest it better than others. To be a real estate agent who lies to people about apartments being bigger than they are and ripping people off, then you have a lower chance of encountering divinity but when you do something like music, something that has no reason. Most of the musicians, you are here at a festival, some of those musicians are successful and some of them are even rich. You look at them and think that is why they wanted to be musicians, because they want to be successful and rich and adored by people, but actually most musicians are not and even ones that are successful and rich have often suffered a lot in their process to get that. Music is one of those things where there is no reason to do it, the only reason to do it is to access those things that you are talking about right now.