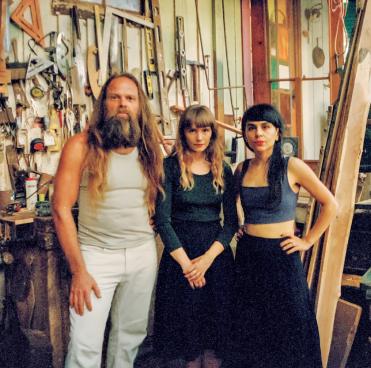 [to Thor] Thor and Friends consists primarily of you, Goat, and Peggy, your bae, but there's a lot of rando friends joining you for different shows. Y’all are playing a bunch of instruments, some of which you made, some of which you didn't make. You have said, "This is not a rock show", and I'm glad you're here, Goat, so if he's wrong, you can contradict him.

Goat: He's not wrong, this one time.

Thor: Most modern musicians have worked within a pretty rigid and tired framework, for the last however many decades, that is rock and roll. Rock and roll has existed for 75 years; we all love it and grew up on it, but it has a lot of old tropes that are a bit tired. There's always new life for an old movement like that.

Thor: Yes, but we wanted to get completely away from that with this band. Goat has amazing taste, she's into exotica and tropicalia. We both share a love for mid-twentieth century minimalist composers like Steve Reich and Terry Riley, and of course, Moon Dog. I really love where electronic music has been going. This band is influenced as much by electronic music as early twentieth century composers. We wanted to not have bass, drums, and guitar, and to not have verse-bridge-chorus.

Goat: And we wanted to maybe not play the same thing every night, or to play it the same way or length every night.

I'm on your Twitter (Goat: oh boy!) and I was struck by the way that you replied directly to people. You were promoting other people's work, which many artist accounts don't do very much. It reminded me of Amanda Palmer (of Dresden Dolls)-

Thor: She's a dear friend of mine.

Totally! Something I figured out after I creeped on your Instagram and then thought, "Oh my gosh, these are two people who not only have an understanding, but a desire to create community in unconventional ways."

Thor: She’s great at it, and we've been friends for 20 years. We love each other, and I love the way she creates communities. She's a great person, and it’s unfortunate how the media has attacked her, but she is an inspiring person and friend.

The tail end of that question was, in reference to the name of the album being ‘The Subversive Nature of Kindness’: how do you promote kindness? I ask because your Twitter account shows me that you believe in creating community, and your actions have connoted that as well.

Thor: It’s pretty clear that our society is messed up and wrong, and not just since the election of the unspeakable idiot. The greatest way to promote kindness is just to go around being kind to people all the time. To me, it doesn't feel fake or like a front. I truly believe every person you meet could end up being your best friend, even if you kind of hate them at first.

Goat, could you speak to what kindness means to you, or how you have participated with it through this work? What are you hoping to communicate to others about it?

Goat: I like the communal aspect of it. Thor has never told anyone they can't play with us if they want to play. If they want to join us in the moment, it's an open door; the answer is yes. Even if it creates a stressful environment or we have all this happening at once, it's always worth it in the end, this kindness/open door policy. I show up at his house all the time, bursting in on acts of kindness all the time. There’s always something going on—helping neighbors, little uncelebrated moments of kindness, which are just as important as talking about it.

It’s actually about doing it. That’s the bottom line: you just do it, and you know it if you see it.

Thor: Being kind doesn't mean that people are going to take advantage of you. My friend John said, "And so what if they do?" My thoughts exactly.

Thor, this question was written with you in mind. You’re born and raised in Texas. The South, and indeed the whole country, has a problem with toxic masculinity. How did you experience toxic masculinity growing up? I ask because I think cruel and unkind systems and behaviors frequently stem from toxic masculinity.

Thor: I grew up as a soft art kid who had a lot of emotions. I experienced depression way before I knew what it was. I had turbulent mood swings when I was a little kid. My dad was a sensitive and caring man who died when I was 10, and I was raised by women and made friends who were women. When I'm around dudes, I enforce a 'no toxic masculinity' thing.

Goat: You set a tone.

Thor: I think Texas is famous for toxic masculinity, but the world is rife with it now.

Goat: We didn't invent it, but we have a unique brand of it. I prefer when gender is not an issue. When you are not thinking about it, that's the best. When you are in the recording studio and it's not three men and two women but five people.

I've heard this recently from a variety of musicians, that they don't believe it's their place to participate in politics or discuss politics. I know that you disagree with that perspective, and I’m curious what your reasoning is for being so vocal?

Thor: We are on the brink of complete environmental collapse. We have no time for anyone to sit silently on the sidelines. Somehow, we have the worst people as our leaders most of the time. If anybody has any sort of platform—I just couldn't not.

That book I mentioned earlier—God Save Texas, by Lawrence Wright—is a socio-political analysis of Texas. Wright grew up there, and he tries to give the reader a full perspective of the different types of people who live in Texas and the stereotypes against Texans, of which there are a lot. Wright said he thought Texas was a bellwether for the rest of the country as far as political direction is concerned. Do you think that's true?

Thor: I certainly hope not. The thing about Texas is that it's not a Republican state. It's a state where people don't vote.

Goat: And it’s filled with people who are prevented or discouraged from voting

You live in Austin, which can be an echo chamber where you hang around a lot of people that are similar to you or that have similar values. That can be satisfying, but how do you engage in meaningful discourse and interact/educate others who have contrasting viewpoints? Are you seeking that out, or are you finding that you haven't sought it out as much? A lot of people are noticing that they are not interacting very much with people who are different from themselves.

Thor: I do go back to my hometown, La Porte, on the coastal side of Houston, which is really Republican. Even there, most of the people I interact with are pretty liberal. My family is, but occasionally we get into some lively debate at family things. I do want to engage more with people who disagree with me, and I do think that that's productive, especially when I can stay calm and not yell. I am kind of in a liberal bubble in Austin. It's great when the Texan or federal government does something stupid, since thousands of us go protest at the capital, which feels good, but we do need to reach out.

Goat: There was less of an echo chamber in that era too. Cities getting more expensive and pushing people out creates a physical echo chamber, and then there are algorithms on the internet creating online echo chambers, which narrows what we are exposed to and divides us.

How would your mother have done that? You mentioned that she was a woman who doesn't take BS, a trait of a person who would tell you when you’re wrong? I think of that older generation when considering how they would have a meaningful conversation without breaking something.

Thor: The way that my mom and my sister reached out to people was in the classroom. My sister was a high school teacher who would tell her students that if they were already making their own decisions in the realms of religion and dating, why would they let their parents determine where they stood politically? My mom did a similar thing.

Goat: I was gonna say, not to bring up your mom's funeral, but at your mom's funeral, there were a lot of probably conservative people. Still, the way they talked about her was so sweet. Knowing that she was on the opposite end of the political spectrum, the speeches about her said things like "she was such a kind-hearted person, an open-hearted person," all these euphemisms for liberal. She was a liberal left-wing person. They said these kind things, and that crossing of the aisle is rare. They were saying we understand why she believed what she did even though it's directly opposed to everything that we vote for and say that we believe in.

Thor: They believed in my mom, even if she didn't convince them that they were voting all wrong. They certainly believed in her and felt that her reasons for being the bleeding heart liberal that she was were the most honorable thing on Earth. Goat is one of my favorite people in the world, and I really regret that she never got to meet my mom.

Thor and Friends are traipsing around and will be touring with Wye Oak in November, albeit not in our neck of the woods. ‘The Subversive Nature of Kindness’ is out now via LIVING MUSIC DUPLICATION.