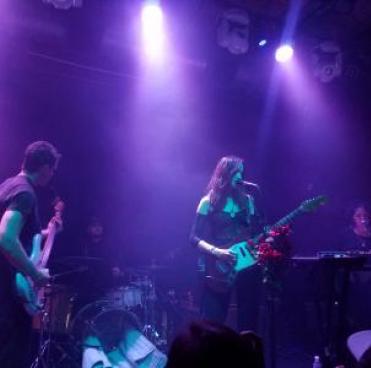 Read Theresa Wayman (TT) of Warpaint's recent interview with KALX volunteer Stormy Phoenix for an inside scoop on the life and work of the artist herself.

I had the lucky chance to interview Theresa Wayman aka TT of Warpaint as she releases her solo debut LoveLaws out now! TT is currently touring in support of LoveLaws and performed at the Rickshaw Stop Friday night on July 6th with opening act Freedom Fry. Read below to get a personal connection with TT as we discuss about Warpaint, touring, LoveLaws, and romance in just 20 minutes inside her tour van!

I’m Stormy Phoenix of 90.7 KALX Berkeley with talented multi-instrumentalist Theresa Wayman (TT) of all-female L.A band Warpaint. We’re here at Rickshaw Stop in San Francisco. Welcome, and thanks for having this chat with me. How is it like in the Bay Area so far?

It’s amazing! Very good vibes, good weather, nice things and people to look at. I feel like there's always something special going on around here.

How was your Fourth of July?

I just moved to El Sereno recently, which is more east than I've ever lived. I had a surround sound of fireworks of not just sound, but surround visuals. It just goes off there. It’s just constant from before it gets dark so it's pretty exciting

Now most of our listeners know that you’re one of the original guitarist/vocalist for Warpaint, and that your band has been together for over 10 years. What’s the secret in keeping a long-term band together?

I would say being a self-reflective person. Somebody who's willing to think, “What am I contributing to something that doesn’t work for the situation?” instead of being in denial about that stuff and being defensive. I think all of us are equally good at that. You know, it’s putting your ego aside sometimes and just being a nice person. I think that’s the most important thing. Realizing the band isn't about anyone of us more than any of the others, and that's what's so special about the band [Warpaint]. 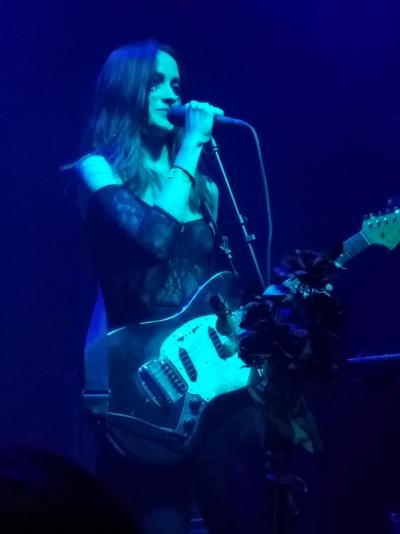 During the 14 years with Warpaint, you ladies had the privilege to perform in numerous festivals, tour with the XX, Depeche Mode, and recently former One Direction member Harry Styles. How was the vibe like, because each of the artist you played with definitely contrast each other musically?

I mean, I feel like the more professional and the more experienced people are,the better they are. The nicer they are to be around and more comfortable they are, the less they have to prove almost. So far, these bigger characters we toured with have been the coolest. They done something that’s gotten them there. It’s such a nice blessing to see how it feels and to do good music that touches people.

Any good fun memories from the tour?

Depeche was nine weeks and it was a big chunk of our life. It was so fun to meet them and their crew. We all got along, there was no drama. And seeing how they do their shows and feeling inspired by their sets... it fueled our fire. With Harry too, it was really fun with his audience who are mostly young women. That was really great for us because we’re an all- girl band. It’s something good for these girls to see.

Those bands you played alongside with have also done solo albums. You just released your debut solo project LoveLaws under your own label LoveLeaks, I’m curious did you get any advice from your musical peers about going solo? Or was this another passion project you intended for?

I’ve been aiming for this for about five or six years, and it’s just taken me that long to just really get there. I couldn't get enough out of Warpaint and that’s fine. That doesn’t mean I don’t want to be in Warpaint or that Warpaint doesn’t serve me. We all get to write and contribute. There’s no way that any of us can get out all of our ideas. I’ve been working towards this for awhile. I finally finished it [Lovelaws], put it out, and I’m really proud of it. I’m happy to open that door and see what else is next.

It’s nice you have the support of your bandmates, brother, and friends to help contribute to LoveLaws. Some of these songs are a lot older and you poured all your emotions into this. How was the long process like in creating this album?

Well for one, it was very therapeutic for me. I didn't realize how therapeutic until after, and then I kind of saw that I had put to rest some of those things that made me write it. You know, things that I didn't understand before I was writing, andt things that I kind of had my head wrapped around. That was a vivid therapy session for me, and doing it was really cool.

Speaking about emotions, you stated that LoveLaws is a “down tempo, pretty sexy, and a bit emotional” record. There are themes of loneliness, heartbreak, and the ups and downs of romance being reflected. How does it feel to strip your raw vulnerable side and share it to an audience?

At this point, it feels really good. I don’t see it any other way. I was subconsciously straight forward with this album. I wanted to be relatable and honest that’s something I really value.

What I really dig about LoveLaws is that it’s very hypnotic, dreamy, and funky like the song “I’ve Been Fine”. Let’s talk about the making of the video, because I definitely felt an emotional impact.

That's awesome! Me and my friend came up with this idea and we went for it. Me sitting alone watching myself– watching a memory in this place where I’ve probably been before with a person who I was in love with, and you’re not in love with this person anymore. These moments in life happen and they pass. We’re not in that time anymore. In the end, don’t take things too seriously either.

Is there a message you want to share with your fans through your album? What advice would you give the millennial generation about relationships/love?

Well, I've been a person kind of obsessed with love and intimacy, because I feel like I'm a very romantic person. Then there’s another side of myself that loves my life, loves my friends, and loves creativity. I think with relationships and intimacy, I was giving too much time to that. Make the right things come to you. I’m not chasing things anymore. I wanna just chase myself and focus on who I am. I just feel a lot better and healthier about it. I feel so much more balance and happier.

You also mentioned that you’re a “romantic person.” How romantic is TT? What’s romance to you?

I fantasize. I always had since I was really young but like this perfect meeting of two people who are so in love. I used to make up stupid stories in my head all the time when I was little girl.  Funnily enough [laughs] when I was sitting on the toilet, I’d make up stories about the girl and the guy, like princess and fairy tale stories. I just like intimacy. I like those moments with people. So I was always excited about having or finding that. Like that was the most fulfilling thing I could have at the end of the night. I realize now that’s not always the case. Especially, having a kid. My kid is so amazingly fulfilling.

I know that you’re a very busy woman, but how do you balance work as a musician and motherhood?

It's not an easy thing to figure out. I think that you just end up doing it because you have to. “Hey, I’m going on tour to make money. This is what I do.” Then I’ll come back for a month. It’s not easy and my son is 12.

What have you learned about performing as a solo artist vs playing in a band?

It’s kind of starting over in a way. I help with load in, load out, and set up. I’m much more hands-on in this situation, which I used to be years ago. It's nice starting in the beginning again, which is fun. I also learn that as much as I'm doing my own thing, I still love collaborating with people. If I'm hiring people to play in the band with me and play parts that I've written, I still want them to bring something and feel it for themselves or bring something of their own. I like learning people’s different styles that’s exciting to me.

What can we expect in a TT show?

I’m gonna play my album and play one song that isn't on the album. That’s pretty much it. I’m gonna wear some glitter and it’s gonna be so off the chain!

Thank you so much for your time Theresa. Can’t wait to see the show tonight!