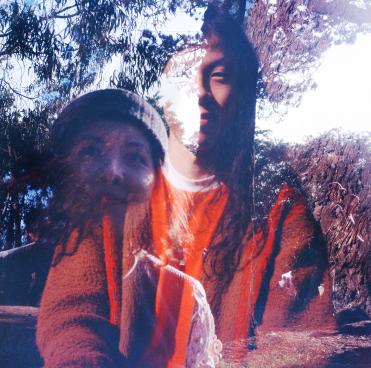 The Pencil Sharpener interviewed Go Kurosawa of Kikagaku Moyo at Outside Lands on August 11th. There is no doubt in the Pencil Sharpener’s mind that the interview was worth the multiple modes of public transportation it took to get to Golden Gate Park from the East Bay.

We're here at Outside Lands, in the sun, on the grass, it's beautiful. Go is wearing an orange sweater, orange shirt with blue pants and it's all fitting because he recently moved to Amsterdam and the color of the Netherlands is bright royal orange.

The band is five of you. You now live in Amsterdam but do the bros still live in Japan?

Yeah, Osaka, Tokyo, and Fukushima. Three of us live in different parts of Japan.

Do you record your parts separately? Have you recorded when you were living in different locations?

Recording was done together but songwriting we are doing separately.

How are you pulling that off? What's the workflow?

Internet. Every week we put forward some ideas. It can be anything, like humming, or anything that you like or are inspired by. We just try to share what we are doing because we used to live together in a big house so we could feel and know what was going on but now we are separate. Every week everyone is playing some rhythm or bass line or guitar riffs, chords and then mainly I try to compose it all into one song.

I could see lots of possibilities for communication mishaps but it sounds like everyone is highly motivated. Does it feel like everyone is excited to show what they've worked on over the week?

It's half and half and it can be kind of embarrassing. It's not even a song, it's as simple as humming on your phone or something.

I was looking at these photos of the group that have a timeless quality to them, as if they could be from the 60s. I think a lot of people might have expected that 'psychedelia' as a concept wouldn’t age well but that's not true. I wonder if you've had to deal with stereotypes about psychedelic music and what do you think the false stereotypes are?

In psychedelic music there are many sloppy bands, so many college and rock bands that are really bad musicians with bad recording quality and out of tune. I really like that style and I think it's really charming to hear people's mistakes. I like the freedom.

How has being Japanese impacted your understanding of what psychedelic music is? Is it different from an American's understanding?

How your upbringing and cultural notions have impacted your-

Right! In Japan we don't have this kind of drug culture, that's one of the biggest things. Japanese bands try, when we hear psych music, psych art, to ask what is this? We cannot speak from firsthand experience and we have to guess- maybe tripping sounds like this? We make it more extreme than people who have actually experienced tripping because we have to use our imagination.

You're trying to incur that emotion in someone else?

We try to trip without drugs, with music, to see how the mind can go into a different state without taking drugs and just by playing music.

The sitar, which was plugged in today at your set, was electronic sitar. To me, the biggest stereotype of psychedelic music that isn't true is that people who are into psychedelic music wish that they lived in the 60s and 70s. Rather, it's about the experimentation and a natural pace of life, not rushing. Don't be in a hurry, you are going to be where you are going to be.

I used to live with a guy who played sitar professionally and he would play for 12 hours a day. He smoked some weed but didn't have to in order to get into this higher state of consciousness that you're talking about, which I associate with the ragas of the sitar but I guess can happen with really any instrument. What is it about the sitar- can you play it longer? I have this idea that you can play sitar longer, is that necessarily true? Could you play guitar for that long?

Ryu came from totally traditional Indian music background so he can play longer because that's what they do. He goes to India a few times a year and still learns from the gurus.

Can you tell me more about your label? Why the name, who are you trying to highlight, and where are you at as a label?

Guruguru is an onomatopeic word which means to cycle around and around. We started the label in Tokyo three years ago. Our first goal was to put out some Asian bands because we picked some Taiwanese and Indonesian bands to tour in Tokyo. I realized by touring the Europe and US all the time, maybe we can contribute somehow, we can elevate (other Asian bands). There are still people who are coming to our show just because we are a Japanese band which they have never seen before.

You knew these bands existed in other East Asian countries but that they didn't have the avenue to get that leg up, so you're really about giving the leg up?

Yes. I also think these big festivals are international and really good, but the lineup is usually all American, British, Australian, and just western-centric. For English speaking people it is so normal to listen to pop music and understand the lyrics but for non-native English speakers, we don't know what people are singing about. We can see that people want to hear something different. Up to now, Asian bands have thought that getting signed to an American or English label is the definition of success but now we can do something from Asia and we can make people realize that other parts are still interesting.

Have you heard the phrase 'a rising tide lifts all boats'? It means that to share your success with others is the ultimate gift, when you share everyone does better. It doesn't take you down to help anyone else.

How many artists are signed to you right now?

We have like 10 artists. The reason why we moved to Amsterdam is that Kikagaku was always touring in Europe and we have backline there so we can let our bands use the backline. For Asian bands it's easier to come to Europe and tour, they can stay at our place and we know the booking agents. All the recording plants are in the Czech Republic and Eastern Europe so if we are based in Amsterdam we can ship from there and not from Japan. I feel like Holland has good festivals and a good music industry but not many bands, the rock scene is not very much, it's quieter.

But people are passing through, right? Which is good for touring bands.

I've noticed that other psychedelic rock groups have a real commitment to producing art related to the group. Kikagaku Moyo has a Tumblr account and site where everything related to your band exists. What was the motivation to do that?

From the beginning we decided to maintain strong direction for art production. Tomo and I have similar taste and when we see good art, when we find someone or anything interesting, we share it- say “oh this is cool” and then try to collaborate.

You reach out to artists and say ‘I would like to work with you’?

From all over the world?

Yeah. The next album, the art is done by a Thai girl.

Where are you finding their art?

On the internet, Instagram, checking magazines. Keeping a tab.

I'm still blown away that you have such a desire to highlight other artists both on the visual arts side of things and as a label. I saw Kikagaku perform today with everyone standing in almost a circle. The group really looks like a unit and no single person is the focal point of attention. At the end, your keyboardist took a photo of the crowd. I thought it was so sweet. and then I saw you in the crowd as the next artist played. It was surprising and lovely and unusual. Why is it unusual though? I'm not necessarily looking for an answer it's just an observation.

We cannot really pretend to be someone different so it's natural.

Are you working on another record right now?

We just finished a record and premiered the first track from the new album a few weeks ago. The new record comes out October 5th.

What's the logic behind that?

Masana is a made-up world, our imaginary world. Most of the songs we wrote are related to that world and were borne during the tour last year. We are always traveling, being homeless. You always wake up in a different place and are eating different foods. These five people in the band are always together though everything else is different every day. My identity became half between individual and group and we felt a different journey together and that experience we shared was our concept. The trip, traveling.

I don't know! I was always feeling a little bit weird about this group-oriented mentality. Too much of the same, everyone doing the same thing and losing sight of yourself.

What do I actually want versus acquiescing---

Do you do it because you want to do it or are you doing it because everyone else is doing it?

I want to see more DIY.

How would that manifest?

The artist would take more creative control. We went to Australia last winter and toured with King Gizzard and the Lizard Wizard who do it super DIY. King Gizzard has their own label and they have a warehouse where they can practice any time they want, they have an office there, they print their own records and they can put out shows. I was so inspired by how the band was not only concentrating on the music but that any part of the process that you can do yourself, you should do yourself.

Recognizing the importance of non-music decisions related to the music, it matters that you chose artwork that reflects what you believe your group is about. It seems financially viable if you find a collective that you can participate in. In your case, Guruguru Brain is the collective. Does a mechanism like that make it financially viable for people to do DIY ?

I want to see the mindset that thinks more about how the system works. If bands release their own music, the industry can change because the fan doesn’t care if they are buying music from the established label or from the artist directly.

Kikagaku Moyo releases their fourth album, Masana Temples, on October 5th via Guruguru Brain. They’ll pass through our neck of the woods on October 10th, playing at Starline Social Club in Oakland.