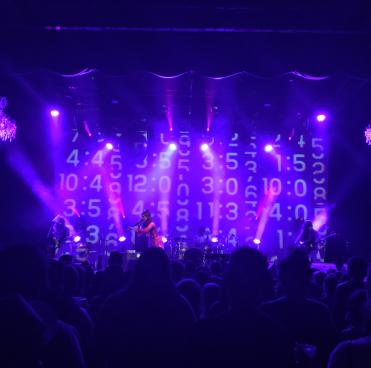 Prior to her show at the Fillmore this past Monday, I spoke with Kate Nash about her new record, Yesterday Was Forever. After a five year hiatus, this is her first major release since 2013’s Girl Talk.

Nash is an independent artist who creates pop music with a blend of indie grunge, piano ballad, & electronic flavors, with associated acts being Watsky, Lily Allen, & FIDLAR. When she’s not leaving her audience in awe from slamming on a keyboard post-ballad, she’s digging through archives for a documentary, creating a musical, & playing the role of Rhonda on the Netflix Original GLOW.

You just released your new album Yesterday Was Forever. Could you talk about the inspiration behind that name?

I guess when I first came up with it, it was more like I’d been doing a lot of archiving, just because I’d been working on a documentary. I was looking through old diaries that I had, and it just seemed like a slogan that reminded me of these things that you say in your diary when you’re a teenager that almost don't mean anything, but then almost mean a lot as well. It’s this depth that you have when you're being hormonal that can sound trivial, but it's actually really meaningful at the time. I guess it’s like a reflection on when you're going through something, or what your life looks like, you kind of see that as being forever, but then that is constantly changing. As you grow, you sort of learn that.

Do you have a favorite song to perform off the new record?

I’ve really enjoyed playing “Twisted Up” live. We’re kinda just getting to know the new ones. It’s this challenging thing with the set list where you have to try and get that right– give them enough new stuff as well as the old. “Always Shining”– it’s fun to play that, too!

The record has a pretty diverse sound. Some of the songs are very electro-pop, others are a little more indie grunge. How would you go about describing your sound?

I think it's hard. I just sorta put it under the genre of pop, really. I’m definitely inspired by a lot of genres of music, but I’m always aiming for a pop melody.

The first track of the record, Life in Pink, immediately introduces some dark themes, addressing mental health and such. The lyric, “I keep heart shaped glasses close to me, for when it rains (life in pink)” creates this intriguing visual, this literal idea of someone placing a filter on a rainy day. Do you have a story or inspiration connected to that?

You know those glasses where you look into lights and you see shapes, or put on a filter, like a red lens? Colors can change your mood and how you see things, and I remember freaking out when I put on those glasses, like “Oh my god how could you be sad wearing these glasses because they just make everything so amazing.” And so, if you can try and recreate that metaphorically in life when you're having a down day, it's pretty important to have things that lift you. Like when it rains, and it goes to shit, what are your heart shaped glasses? What gets you through those times to keep carrying on?

Are there any artists, or producers even,  that you'd really like to collaborate with in the future?

Yeah, there’s so many artists that I think would be cool to collaborate. My number one dream collaboration would be Eminem.

Are there any projects you're working on right now, or eagerly waiting to start on once you wrap up your North American tour?

Yeah, I’m working on a musical called Only Girl in New York. Once I finish touring, that’s going to take up some of my time because we’re going to be doing workshops with that in the spring. So that’s been a long project, like 8 years, and I’m looking forward to that finally happening.

After attending the Brit School for Performing Arts and Technology, you planned on studying acting but faced rejection from drama colleges and universities. Yet, here you are, having acted in films, and you play Rhonda on the Netflix original GLOW. Those rejections from drama schools clearly didn't get in the way of you pursuing your passion, so how did they impact you, and what was the process like overcoming that?

At the time I did find it hugely discouraging, but at the same time it gave me a drive because I felt quite left behind, since a lot of my friends did go to university and I was working at a fast food restaurant. It just made me be like, “Oh I’m not doing this for a long time,” because I hated it. It gave me the drive to go out and play music. I did open mic nights for the time, started a Myspace page, and started playing shows because I didn’t wanna be just waitressing. It was so discouraging and motivating.

This music route wasn't part of your original plan, yet you managed to break through quite successfully. Do you come from a musical family?

I had a piano in my house growing up and so me and my sister played piano from a young age. I just always continued it and I started writing songs when I was at school. There was a long list of music being listened to in the house. Even though my parents aren’t necessarily musical people, their voice has been very encouraging of anything that any of us wanted to do, so I always felt encouraged to ask what my heart wanted.

You've managed an acting career, and a singing career, so is there any other medium you’d like to try and really focus on?

Marine biology was always so interesting to me when I was young, so at some point I think it would be cool to go back to that. I definitely have an interest in nature, and the study of mycology is really interesting to me.

It's been five years since you last released an album. Is there any reason for this timing or is it more so that you've been busy with filming GLOW?

It’s jubilated, perhaps struggling to deal with a lot of the bullshit that you have to face in the industry and figuring out how I was going to continue as an independent artist. There were times that I really didn’t know if it was gonna happen and I was considering having to give up music being my main job. I just think it's really important to talk about how the industry works, because it doesn't really support artists’ longevity and I think there needs to be more of that thing. I've said that for years, but having had such a strong experience with it. It's good to know that the internet is there for innovation and to reach outside.

In the midst of working on Girl Talk, your label dropped you via text, meaning that everything for promoting that record came down to the work of you, your family, the girl band, and your fans. Even now, your website encourages your fans to join your street team. Knowing that these people don't just listen your music, but they'll go as far to promote your work, what is that like? Does it make you feel closer to your fans?

Definitely. I feel very lucky. It’s a strong community. The fan-base, they come to my shows on their own, and they’ll make friends, and I’ll see them interacting with each other and they’re really sweet to each other and it’s an open, very friendly environment at my show. I’m just really lucky that my fans stick with me through different things I want to do, like street-teaming, flyering my shows, buying my record, and supporting my kickstarter. I feel very grateful for that because I know not everybody has that and so it’s very important to me.

When she’s not out and about, Carmen Llerena can often be found sitting in her dorm photoshopping random images, flipping through fashion magazines, or finding obscurely named bands on Spotify.