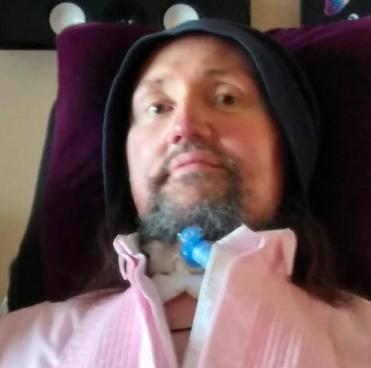 A note from the interviewer, John The Reptilian: As a teenager in the 1980s Jason Becker was one of the most promising up & coming players & one of the most talented guitarists of all time.  In 1988 he recorded his groundbreaking solo album Perpetual Burn. Prior to that he had recorded albums with  Marty Friedman under the name Cacophony. He landed the role of lead guitar in the David Lee Roth band & recorded the album A Little Ain't Enough. Prior to the first tour Jason had to give up playing due to an ALS diagnosis which confined him to a wheelchair & eventually caused complete paralysis & cost him his ability to speak. For the past several decades Jason’s friends and family have taken care of him at his home. Through the use of a system of eye movements and computers he continues to produce new music.  His positivity, musical ability, and willpower is truly inspiring.  In November 2019 I was invited to their home for a conversation with Jason & Gary Becker who translated for him.  Thanks to Jason Becker, Gary Becker, Pat Becker, Sarrana & David for their hospitality in helping make this interview happen. Due to the fact that this story has been told in many interviews, articles, & the Documentary I’m Not Dead Yet : The Jason Becker Story I choose to instead focus primarily on the current project & questions that had not been answered elsewhere.

This is DJ Jon The reptilian on your K.A.LX. Berkeley, very pleased today on the program to be joined by Jason Becker, local guitar great. How are you doing?

So I guess just to get started, we should probably explain to the listeners, the means in which we're communicating, and whose voice we're hearing, just very briefly.

(Gary Becker speaking for himself) I'm Gary Becker, Jason Becker's father. I invented this communication system for Jason many years ago when he was losing his voice, and basically every letter of the alphabet involves two eye movements. We have a grid memorized, and so I'll say the letters and when I know the word then I'll say the word and we'll work our way through sentences so sometimes you can go quickly and sometimes I can get confused, but it'll work.

I think we're going to kind of gloss over the first sort of chapter of your career because I think what's going on right now in these new albums is very interesting. But I guess if people are interested. There is a really great documentary called Not Dead Yet the Jason Becker story. One of the things I'm actually interested in is that movie.  I think it’s the director's first movie. How did it come about that he told your story and how were you approached with that proposition?

I had many directors try to make a movie and talk to me about it but nothing ever happened. So I was skeptical, and basically said no to Jessie Vile.  But he sent me a trailer he made from stuff on Youtube  and it was killer.

So a good lesson about persistence and showing people that you're serious about things right. It must be a hard thing to condense years of experiences into 90 minutes, But overall,  were you happy when you first saw the film?

You have a new album out, Triumphant Hearts, could you talk about the vision of this project and what was your motivation for making this record?

My motivation was I just kept thinking of music & recording it.

One skill I imagine you have to have is the ability to visualize a melody in your mind, and then just know that you're hearing a root and a flat three and a five and compose without the use of an instrument. Was that a skill that you always had or did you have to develop that later in life?

Hmm ...I guess I always had it. It just takes patients

(Gary Becker speaking for himself) not to interrupt but yeah when he was young, I was his first guitar teacher and I would teach him songs and as he got better and better over the years. I would play. I played classical guitar too. I started it pretty seriously, I would play a classical guitar song for him, and he would just look at it and then he could play it, which blew my mind because I couldn't do that, I would have to read the music and practice. So he had the mental thing going on very early.

Do you kind of jam and experiment and kind of throw elements together mentally in the process of composing?

Yes, I used Logic Pro and I  can get great samples of every instrument and I can mess with melodies pretty easily when my caregiver puts a note I can move it  around, make it longer or shorter and anything I want. I can mess with it a lot.

(Gary Becker speaking for himself) Yeah, I've worked with him and I'm not the super professional but I can work with him sometimes on the computer and he'll have me punch in a few notes and then you press play and there's a little melody, and then he'll play with those notes each one, move it up I don't know where he's going with it. It's on a computer screen, move it up down left right and do a million things with it. And when he's done, he says, he presses play and it's amazing it's totally transformed. It's just, it's a mystery and a wonder to watch him do it.

I'm curious as technology advances with the improvements in cameras and AI and facial recognition technology have you come across a controller that perhaps offers the possibility for you to control it yourself or is that something you're not super interested in.

I am interested but last time I tried it wasn't accurate enough for me. But it  might be better these days.

When you compose these pieces you got some great artists on here, playing some great guitar parts Trevor Rabin from the YES stuff, Marty Friedman who you were on an album with Satriani is on it... When you compose these parts, and you make these arrangements and you pick the players or you get the players through your contacts. Are you really hands on as far as technique and tone or are you a producer / composer that allows your musicians to interpret that aspect of the composition their own way?

Good question. It is about half and half. With some songs I tell them exactly what to play but usually using their own feeling... like, on Triumphant Hearts and Magic Woman and Hold On To Love I had Marty  Friedman, Uli Jon Roth and Daniele Gottardo play my melodies but on A Valley Of Fire and River Of Longing I had everyone do what they felt.

Thinking about some of the stuff on this album. There's a lot of different genres, some tracks are very classical which I knew you had a passion for, some are obviously very progressive or metal guitar driven, some flavors of more r&b and soul... it would be hard to classify this work into a genre, which is always kind of my favorite kind of music,  the kind that you can't really stick into a box. Have your ears always kind of gravitated to multiple genres all over the map like that?

Right. I love all kinds of music. And you Know the R&B and funk influences on this album came from Serrano’s input, she gave me the love for that stuff.

And there's also a good chunk of your own guitar playing on this album, pulled from old,  tape recordings. Combined with parts you composed on the computer most recently & had other musicians play. You’ve had a very productive past few decades. Do you think that there's an incorrect way that people are communicated to when they get an ALS diagnosis or other severe life changing issue of that nature regarding their future and their possibilities? What would you  say to someone who is trying to create art and live a life facing that kind of challenge?

It is still so very very difficult for any one but my blessing is having  many people who love and care for me. I don't see how anyone could do it without tons of help.

Probably also just translates to everyone to, you know, we're living in a time when things look very hopeless for a lot of people.  Things in the world are bleak. Many don’t feel they have the power to change things, they don't have the power to, you know, overcome imbalances of establishment structure. It's probably just good advice for everyone to band together, help each other.

Yeah, that's what it takes. Exactly.

(Gary Becker speaking for himself) But if they can get a crew together. I mean that's how you live a long life, if Jason, they wanted him to just stay in the hospital. He would not be here if he stayed in the hospital. Serrana and I were there and we said no, he's coming home to live. He's here and he has a productive, creative life. That's what we all need, whether you can run or whether you're paralyzed you need that. And so, on any scale or level try to get that try to get something creative

I know you have this album that just just came out. But are there any future plans or future projects or things in the pipeline?

Well, hmm, the Next is probably releasing old guitar demos

With your newer studio material is there like a possibility of this music being performed live in any form?

I bet that would be cool. No plans. A at the moment.

Well, thanks so much for spending time with us here at KALX. It was an honor to meet you and great to have you on the program and I'm really digging this album.  So thank you.