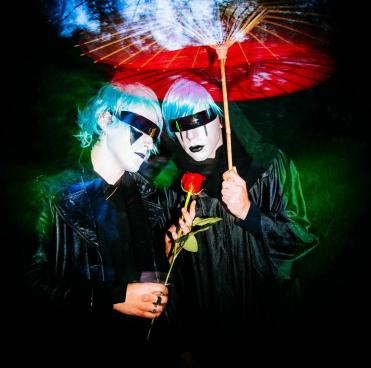 Last year, DJ Carlos Kowalski sat down for a chat with Deb DeMure and Mona D, the darkwave duo also known as Drab Majesty. After two years of near-constant touring, they recently retreated to Greece to record their upcoming album, Modern Mirror. It will be released in July 2019.

What were the origins of Drab Majesty?

Deb: This pairing materialized in 2016, but it was a friendship that was built before that when Mona was putting on a monthly event at a bar called the Hyperion Tavern. He was curating these shows and twice he booked Drab Majesty. It was kind of an immediate bonding over music and our history and roots in LA. He had taken a liking to my work as a solo artist and it was only a matter of time before we decided that we were gonna be friends for the long haul. I had wanted a partner in the project and he was the perfect fit. We bonded over a day at the beach going to sensory deprivation chambers.

Mona: That was the first time we hung out. My sister cancelled on me… she chickened out. So on a whim I hit up Deb since he seemed like the kind of person that would appreciate it. We took a long bike ride out to Venice then floated in silent darkness in two separate chambers for two hours and then kind of spent the rest of the day riding around and talking about it. And so that was the beginning of a kind of more interesting friendship than just the normal acquaintance culture of LA nightlife.

So, you both have done a lot of traveling over the last two years by touring, and I’m just wondering what some of your favorite places are that you’ve been to.

Deb: No one’s asked that! I mean, I was really kind of blown away with South America as a whole.

Mona: It’s really hard to match the sort of mystical topography of Peru. A lot of people have said that, it’s not an uncommon thing to say. Being in the Sacred Valley… there was something about being in the Sacred Valley that was, it’s dreamlike. You walk outside and it’s a perfect blue sky day with exactly the kind of clouds you’d want in the sky, and then all around you are giant, verdant mountains and hills stretching as far as the eye can see, and it’s just… it’s just amazing, ‘cause you can’t really picture it or understand it until you’ve actually visited.

If you two could be cult leaders, create your own cult, what would your first dictum be?

Mona: OK, if I could be a cult leader, mine would be: “Hold nothing sacred that you haven’t envisioned or created or thought for yourself.”

Deb: Interesting question for me. I can’t really locate it. I can only give a smartass answer.

Deb: “The message is in the pasta.”

Mona: That’s like scripture, you can see in the pasta whatever you want.

Deb: Exactly. [Laughs.] You know, I’ve always believed in the body as a kind of vessel. The separation of the self and then the physical self. We still haven’t done the work to figure that rift out and understand that there is a dissonance between your body and your essence, you know, your soul. So I really do ascribe to the Heaven’s Gate principles of, you know, the flesh vehicle. I think it’s got a lot of longevity. And it’s a cool way to lose self-consciousness…

Mona: But it’s so easy to miscalculate.

Deb: Yeah, because society is constantly reminding you that “you are in control,” that you can change your happiness. But these two things are eroding and growing at different rates. It’s really hard to marry the body and mind together. I feel like I can only keep my side of the street clean, and keep my mind and my soul clean, just so it can communicate and keep the body in working order so it can carry out these things. The body’s just a cheap suitcase. It’s dying as we speak. I know this is kind of a digression, but the hardest part, for me, would be to lose the tools that I’ve worked so hard to calibrate to make art.

Mona: You mean your hands?

Deb: Yeah, your hands, or maybe lose your vocal cords or...

Mona: So there is some fear of death, but it’s seated in the limbs and the artifices that you value. You’re still trying to let go of that.

Deb: Yeah, I am trying to let go of that.

Mona: This has digressed into such a trippy – this is like the exact kind of thing that your sort of shabby, bedraggled cult leader would have to address in front of his congregation.

Deb: I would never lead a cult by words, though. I would just try to do it through sound, and that’s essentially what Drab Majesty is doing.

Mona: That’s the best thing about real truth and real spirituality, that it’s ineffable, and anyone who tries to tell you what it is is wrong or trying to manipulate you.

I hope this isn’t too far out, but have you been interested in magic before, or are you currently?

Deb: Yeah. It’s a word that gets thrown around a lot in Los Angeles. I think it needs to be spoken about with reverence and also the idea that magic is beyond something that’s just a practice that can be located in a bullet-pointed regimen or symbolic adherence. I’m conflicted about it, more than I was. I started in about 2008. I joined a temple in Los Angeles and I was going regularly for about seven years. It’s called the Builders of Adytum. It’s kind of a confluence of masonry, Rosicrucianism, and Christian esotericism… it’s a very practical style of magic that doesn’t involve alchemy. It involves more of your own personal meditation on the facets of yourself in the Major Arcana. And that’s something that I’ve found to be really, really helpful, learning to understand yourself through symbolism. I do believe, though, that if you incorporate some kind of daily ritual and regimen into your life and allow it to be some kind of impetus or driving force behind your art, and you do take it seriously, and you believe in it, the magic works on a regular basis. You cannot just throw some sigils on your body and say, you know, “Oh, I’m cured of this thought pattern that’s negative.”

Mona: That’s where I’d go back to my cult leader saying, “Hold nothing sacred that you haven’t generated for yourself.” So I think what’s important is to have a discipline, take up an art, make your own meaning, but also don’t derive your expectations for the outcome, you know, what you want out of life, from anyone else’s success story. Like, figure out what you want, and try to make it different, and try not to subject yourself to other people’s expectations.

Deb: Yes, this is good, figure out what you want. But the one other core principle in magic, across the board, is knowing that you absolutely deserve it. And once you understand that you deserve it, that’s the point that’s the hardest part for anyone to get past. That we all deserve as many bountiful gifts as we want.