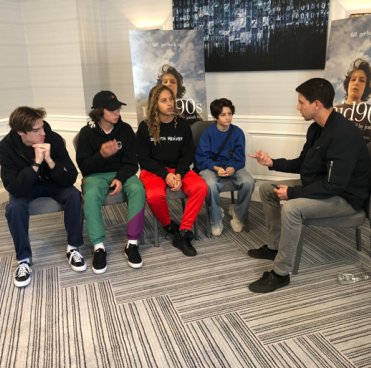 Through a collaboration with A24 at UC Berkeley and KALX, I had the great privilege to interview the incredible cast of Jonah Hill’s directorial debut, Mid90s, at the Ritz-Carlton Hotel in San Francisco on October 16th.

Set in 1990s Los Angeles, the film follows 13-year-old Stevie (played by the incredible Sunny Suljic) as he escapes his turbulent home life by hanging out with a new group of friends he meets at a local skate shop, plunging him into a world of fun, danger, and excitement. It is a perfect testament to the era, filled with as many emotionally drawing moments as heartwarming ones. Every detail is meticulously poured over, from set design to the music curated by scene. It just feels so real; and it all makes sense why Jonah Hill has called the film “his heart” on display.

Check out the trailer here.

What’s up guys, my name is Sean McHugh, I’m from the radio station 90.7 KALX Berkeley. I’m a senior at school right now, and grew up 10 minutes from Stoner Skate Park and the Cove and what not. My little sister Casey is in high school right now and said she’s friends with Mingus and Avi (LA local kids from who served as extras in the movie) if you know them.

Sunny Suljic: Oh, what?! Those are our homies.

Yeah… Alright, I just have a couple questions for you guys. I saw the movie last night and it was purely incredible. Congratulations to all of you. I’m really excited to see what’s to come. So Ryder, I saw a clip of you walking out right after the Toronto Film Fest screenings. You all hadn’t seen the movie before that, right? What was the emotion like for you walking onto that stage?

Ryder McLaughlin: Uhhhh… don’t look stupid. Try not to look at the crowd. I don’t know. Whenever I feel a lot of emotions… I just don’t… Some people, like Na-Kel [Smith, who plays Ray, the most mature and ambitious skater of the crew], I remember me and Na-Kel got the part at the same time. We walked into a 7/11 and Jonah Hill was in there too, and he was just like, “Sup guys?” *doing his best Jonah impression* and I didn’t say a word. And Na-Kel was just yelling “OH! OH! OH!” *laughs*... I don’t know. There was a lot going on.

Sunny Suljic: I can feel you on that, though.

Gio Galicia: Yeah. That really was a huge crowd.

Sunny: I didn’t even know that there was a Q&A after. And it was like our first Q&A, and it was like the biggest Q&A. After the film, I wasn’t really yelling like “Ohhhh what’s good everyone?!” I was honestly just tearing up after seeing it. It was really just crazy.

Would you rather have had Jonah show you the movie before? Or was it cool for it to be a surprise?

Sunny: I liked the memory of watching it there for the first time.

I feel that. Sunny, what was the conversation like when Jonah and Mikey [Alfred,who served as a Co-Producer of the film] came up to you at Stoner to talk to you about the role?

Sunny: Jonah had no clue that I acted, and Mikey just introduced us. Lucas was there too. It was just a normal conversation. I didn’t even know about this movie yet, I thought he was just scouting for extras or something. He just asked me basic questions like, “Is this your favorite park? What do you like about skating? Have you ever done acting?” And I was like, “Yeah, I was in The Killing of the Sacred Deer and he was like, “No way!” He’s friends with Yorgos [Lanthimos, the director of the 2017 film] so he called him and Yorgos just kept talking about me. So I went in for an audition, got a callback, got casted, did a chemistry test with everyone, and it just all worked out perfectly.

How’d that first chemistry test hit? Did you get along with everybody at first?

Sunny: I’m always super confused if Ryder hates me or if he’s just like… Nah, I’m kidding. I just really only hated Ryder but everyone else was chill... *laughs*

That’s good. I was watching an interview with Jonah and he said he did an old Martin Scorsese trick where he gave you guys all iPods to hype you up on the music. Olan, what were a couple songs from the iPod that stood out to you?

Olan: Yeah! But it was dope because I’d never heard the Wu-Tang song. I had only ever heard Pharrell’s version of it before. And then me and Na-Kel had to memorize this crazy, explicit song too.

Sunny: It’s called “Put It In Your Mouth”.

*laughs* That’s good knowledge. So, shout out to A24, they just released the Official Soundtrack on Spotify. What are your favorite songs from the movie that stuck out to you from the movie?

Sunny: I was just about to say the same thing.

That song is sick. That’s the scene at the party where the camera keeps jumping around and everything?

Olan: Yeah yeah, I think! Whatever that scene is, that s**t is tight as f**k. I remember we went to film the scene, and Jonah played it back, and he turned the song on while we were re-watching the scene. And I was just like “ohhhh s**t”, Jonah’s got taste.

I read he personally curated a lot of the songs which is really cool. He’s definitely certified when it comes to his music knowledge. So... there’s that scene where Stevie lands his first trick in the driveway of his house. Gio, do you remember when and where that moment was for you?

Gio: I remember perfectly kick flipping down a set of stairs. I got so happy I f****ng smashed my board. Like I was f****ng raging! I landed it, and rode away for a few seconds, and I just got so happy that I threw it and broke it. But I didn’t even care.

*laughs* no more tricks for the day. But I bet you were back up on it the next one, huh?

Gio: Oh of course, I went and bought a new board that morning.

There it is. What is something you guys picked up or learned from this film that you’ll carry with you through future projects or just your lives in general? 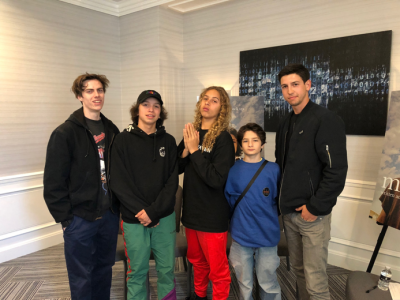 Ryder: A new work ethic that I haven’t really had. It’s not like, okay I’m gonna wake up at 7 am every day for school. I have to plan my day out according to my call time and just be ready to work all night if that’s what it’s gonna be. It’s really the work ethic and a better understanding of how the industry maneuvers.

Olan, what was your experience like getting into character for shooting a specific scene on the film? How’d you prepare for that?

Olan: In general, it was really tough to get into character because when I do, it’s me talking to myself and convincing myself that I don’t try hard at anything. That’s the exact opposite of what I had to do, because I’ve never acted before. I actually had to try so hard because I had no angle to come at it from. I was so new to it.

Olan: Yeah definitely. It was a very deep contrast during shooting.

Sunny, what do you want the audience to take away from the film?

Since we’re a radio station, we’re super into the music aspect of the film. What are some artists you guys are listening to when you’re skating right now, or a new album you guys are bumping?

You f**k with Tha Carter V?

Olan: Of course. I’ve also been listening to a ton of his old and newer albums too.

Who were your guys’ biggest skating influences growing up?

Ryder: Pretty much everyone on old Alien Workshop.

Gio: I feel like when I started skating I would always watch Shane O’Neill. I would just rewatch his parts over and over again.

Must have been cool to work with Na-Kel then on this, right?

Olan: Well I’ve actually know Na-Kel and Kevin forever. We grew up on the same block. But they’re still my favorite skaters.

Sunny: For me, even now, I don’t watch too many skate videos. I usually get excited just watching my friends skate… except Ryder *laughs*... Kidding. Growing up, I probably watched Ryan Sheckler the most. Luis Lopez and Antwuan Dixon too.

Nice. So Sunny, I heard your and Ryder’s song “Been Thru” on Soundcloud.

Olan: “Been Thru”?! Y’all got another song up, and you didn’t even invite me to the stu? C’mon!

*laughs* How about you guys come on KALX soon and do a live session?

Ryder: We made that song in 15 minutes in a hotel room. And first of all, I didn’t even tell him he could post it. He just did it!

Olan: I still can’t believe you guys made a song called “Been Thru” without me!

Sunny: It’s your beat! It’s our song. Whatever, we’ll just make another one. *laughing*

Well, I’m definitely looking forward to hearing some new stuff soon. Thank you guys for your time today. The movie is incredible. I hope you have a great rest of the press run, and it was really nice to meet y’all.

Sean McHugh (DJ The Mick in the Morning) is a senior at UC Berkeley, born and raised in Los Angeles, with a deep passion for both music and film who recommends Mid90s to everyone he sees.