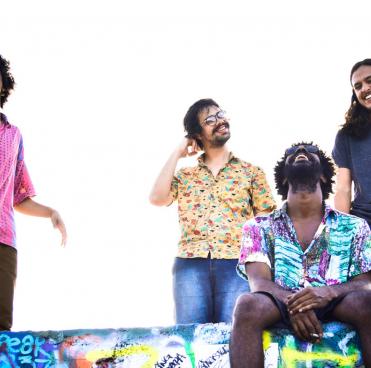 On October 10th, 2019, KALX’s own Pencil Sharpener met up with the members of Boogarins, a psych rock band from Brazil, on the rainy but spirited first night of the Desert Daze Music Festival, held in Joshua Tree CA. Their conversation grazed on where tropicalia is today, the insanity of the Brazilian political landscape and the realities of touring full-time.

Tudo bem? [How are you in Portuguese]

I love Portuguese. It’s a beautiful language. I’m Elie Katzenson of KALX Berkeley and I’m here with the members of Boogarins. Am I pronouncing that correctly?

I know that people call you tropicalia fusion, acid fusion, and I think these genre names are kind of useful.

I’m not a commodity?

So Brazil is having an interesting moment politically, you’ve got a total freak up in there. What’s his name?

Dinho: Yeah, and think about it: you just know the highlights.

Yeah, I haven’t even lived under this dude. So I’m curious: Is the music scene in Brazil political or not? I think of it as a pretty political country.

Raphael: Yeah, there’s the indie scene and everyone is pretty much into this and writes lyrics about this. There’s a band that we’re friends with, Francisco El Hombre, with a song against Bolsanaro that says “that guy’s s***.” He’s s*** as always, not just now.

Raphael: …it’s not a revival of the movement of tropicalia, back in the 60s.

There’s no echo of this.

Raphael: But since we were born, we’ve never seen the country this way so things could change soon.

Ynaiã: The guys from tropicalia are against this and saying s*** and doing concerts against this but everything in Brazil is really spread out and it’s a f***ing huge country and there’s a lot of difference between the states and cities and some cities are more conservative and traditional and others aren’t so it’s quite weird actually. I don’t know because we live in a bubble. Here or there we meet the same people.

Dinho: When we came here in 2016 it was the time of the Trump election. Every place we went said Trump wouldn’t get elected. It was the same one year ago in Brazil but then it started to get crazier and worse and worse.

Ynaiã: The thing is Brazil is really complex. Even we can’t understand our country because it’s a new democracy and a new country and there are traditional families that are in the same position as when slavery ended. It’s a new country and people are really confused. Lots of people are saying “Please Trump save us.”

How is racism seen in Brazil? What is the concept of race as compared to America?

Dinho: Like a fake nice. No—we have black guys on television but it’s still bad. It’s hard to get a job.

If you are black in any way.

Dinho: People will try and stay away from black people.

Raphael: People like to believe that everybody is a mixture—that we have a little bit of everything—but we had slavery 100 years ago which is very recent.

Ynaiã: My grandfather was the son of slaves. It’s really tight—everything is short and unfair practices are still happening. They are still killing black people.

Dinho: The last government had the idea to have some space for black people in the university, I don’t know what you call it here…

Dinho: Yes, quotas. It’s nice, now you have black people studying black history and before everyone in the universities was white people. The future seems better in this aspect because there is more effort to have a real mixing of people. People are always saying that Brazil has all mixtures and all colors but when you go to a fancy restaurant it would be all white people and when you go to a university it will be more light-skinned people. It’s not even just white people, there’s a dichotomy between light skinned and dark skinned people.

Ynaiã: In our concerts [in Brazil], our audience is maybe one of two percent black. In some places, there is zero black people in the audience, even in Brazil.

What does it feel like to be playing to people that are not part of your community? You are Brazilian, you’re touring a lot in the States, and it’s a big deal to not tour in your country and to have to be the representatives for Brazil all the time, but if you are a black person who is not meeting a lot of black people, it’s hard.

Dinho: This is what we want. When we start to talk with someone who plays in a band, we say names of Kava Hosha, Nigo Leo, Leo Mayda or people in Brazil that we think do smart music from this moment.

Ynaiã: I guess we are one of the few Brazilian artists that playing Coachella and that played in Desert Daze. We are the first Brazilian artist to play Desert Daze here. We are already trying to make people take a look and see that there is something interesting coming from South America, and not just Mexico or Colombia. The United States is a place that, even with all this mess, people are more used to and open to music. Music from all over the world because the people here buy things, they are…

Ynaiã: Yes, and they are looking for stuff to consume.

Yeah, and tropicalia is huge. I think it’s had a resurgence. I saw Os Mutantes a few weeks ago.

Yes, it was sooo good! I listened to the recordings and heard a few songs that I liked and then I went to the live show and re-listened to everything. I started to understand it more. The live show makes you understand the music better.

Ynaiã: Yeah, sure. That’s the thing, we have to play for the people so that people will see and recognize what we offer and say, “oh man I never knew I would see and enjoy a Brazilian band.”

That’s why touring is so important and you start to understand the whole workflow. You make the album, you tour the album, people find out about you on the tour, and they go listen to the album and it’s a slog—it’s hard work.

I think that people see it as a lot of fun—and it is fun—to meet people that like your work. It’s expensive, it’s time-consuming, you’re separated from your loved ones. It’s so diverse every day which is great—but where’s the routine?

Ynaiã: You don’t have one.

Ynaiã: And we love what we are doing so this is the most important thing because there are all these hard parts and the people sometimes don’t think about it but I guess that some people know how hard it is to be a band so they support it and this—what we are doing here, in the US and Europe, in Brazil—is very new. We don’t have this whole infrastructure between big cities and small cities and all these things that make this small market function. We are the first Brazilian band from the last ten years that is touring frequently outside and inside of Brazil and we now are living just doing this and it’s already something really really big for four guys from the middle of the country. It’s really f***ing insane.