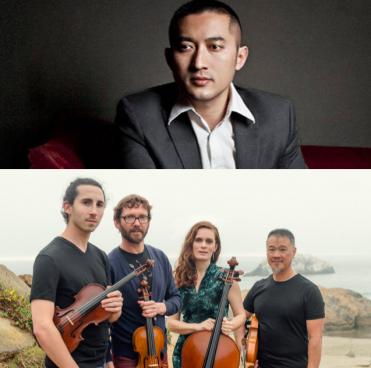 "Angel Island" comprises six movements and is written for voices and strings. The piece is partially based on the Chinese poems carved on the wooden walls of the Angel Island detention center in San Francisco Bay from 1910 to 1940. It was also inspired by real stories from California and Hong Kong, after the Chinese Exclusion Act was passed in 1882.

Chinese-born composer Huang Ruo has been lauded by the New Yorker as “one of the world’s leading young composers” and by the New York Times for having “a distinctive style.” His vibrant and inventive musical voice draws equal inspiration from Chinese ancient and folk music, Western avant-garde, experimental, noise, natural and processed sound, rock, and jazz.

Fascinated by the feedback loop between social change, technology, and artistic innovation, San Francisco-based Del Sol Quartet is a leading force in 21st century chamber music. The current Del Sol lineup, marked by the arrival of violinist Sam Weiser alongside mainstays Kathryn Bates and Ben Kreith, bring a fresh energy, freedom, and precision to the group.

The world premiere of "Angel Island - Oratorio for Voices and Strings" is Friday, October 22nd @ 8PM at the Presidio Theatre in SF.  More info here.