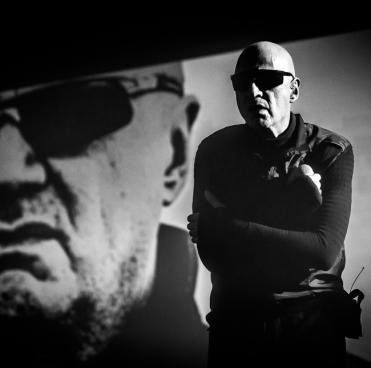 On Tuesday, September 27th @ 9:30AM, The Silence Glaive speaks with singer Jean-Luc De Meyer of long standing Belgian electronic pioneers, Front 242.  Head over to SF this Wednesday night to see the group perform live at the DNA Lounge.

In any map of electronic music, Front 242 will inevitably sit somewhere close to the center. Taking their lead from the British industrial scene of the mid-'70s, the Brussels-based group - which has included seven members over the years - set out on a path of exploration and innovation that has continued to the present day.

Best known as the forefathers of Electronic Body Music, Front 242 signed to the Wax Trax! label and toured America in the '80s, making a profound influence on younger generations of electronic musicians and even reaching 13 on the Billboard dance charts in 1988 with "Headhunter."

Having re-released their back catalogue in newer, enriched versions, and breaking from the idea that every live campaign must necessarily be preceded by a new album, Front 242 currently continue playing throughout the world with the same level of intensity, with the same success as ever, followed and cheered by crowds of loyal fans celebrating the band’s uniqueness and renowned integrity.