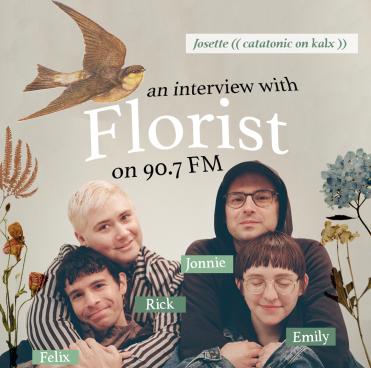 Join DJ Catatonic on Tuesday, August 2nd @ 4PM to hear an interview with New York based indie-folk band, Florist, ahead of their show at Bottom of the Hill in SF on August 11th.

The band's fourth full-length album, and the first deserving of a self-titled designation, is 19 tracks that culminate the decade-long journey of friendship and collaboration.

“It’s a portrait of who we are as collaborators, as really long term friends and as extended family as well,” leader Emily Sprague says of her band’s new self-titled album. Florist is also the strongest album of the band’s decade-long career, an immersive work that conveys the magic of the earth and of family, and the whole of the band’s heart.