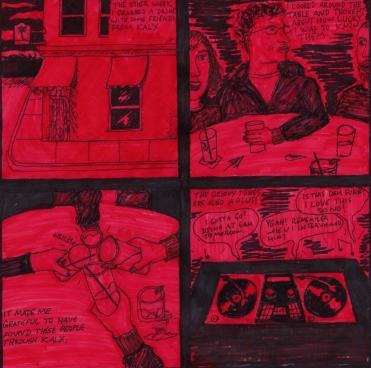 I was inspired to do this design in many ways. I’ve been dabbling in comics and ink illustrations, and decided to experiment with colors. I loved being able to use both drawing and the captions to convey how I felt. I chose red as the main color here because usually when I meet up with the DJs the venues are usually bathed in a red light. It also reminded me of the “ON-AIR” sign outside the air studio at KALX that let volunteers know when the DJ was on mic. Plus, it represents passion.

Since March is upon us, I’ve been thinking a lot about luck. I feel incredibly grateful to have cultivated a community through volunteering at KALX, and I sometimes forget how easily it could’ve passed me by. Literally, I could’ve completely passed by the recruitment table at Calapalooza and never signed up! I wasn’t sure what to expect when I walked into Barrows Hall for the Orientation; was being a volunteer at a radio station going to be fun? And as a transfer student, I also questioned about whether I would make friends.

Over four years later, I’m still volunteering. I became a DJ, attended dozens of shows, interviewed some of my favorite musicians, became a director that gave me real world experience, and met some of the most amazing people at this station. Whether it’s at a show with other KALXers, grabbing a drink with them, or even playing softball, I remember how lucky I am to be at KALX.

Chandler has been a volunteer at KALX since 2014. She graduated from UC Berkeley in 2016 in Media Studies. She occasionally DJs as Hella Bent.