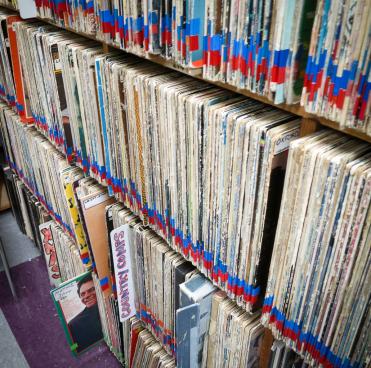 Let’s take a trip to the depths of the amazing KALX library, just one of over 100,000 records ensconed deep in the basement of Barrows Hall.
By Meow
Deep in the KALX LP library, between the film soundtracks and the spoken word records, is a section called “Country Comps” where you’ll find one compilation that epitomizes everything country and western can be: God Less America.

It’s on a record label called Crypt, known for their Back From The Grave series of 60’s teen garage-punk compilations. The album takes its name and cover photo from a once-amazing neon motel sign with the letter “B” missing from the marquee. God bless america--not. The subhead reads, “country and western for all you sinners and sufferers." The back cover depicts a woman wearing only pistols, pasties and a cowboy hat. So wrong, yet so fun.

Side one opens with our first drunken protagonist hallucinating over drinks while lamenting his lost love. Then we move on to Susie, who starts her twisted life of drug abuse and debauchery with a single puff of a cigarette--poor Susie. In “Nothing to Me” we hear about a barroom shooting (over a woman of course) from a bystander. Track six gives us another a murder over jealousy, this one where the man kills his woman while trying to shoot the guy she’s cheating with.

Side two opens with Please Don’t Go Topless Mother, which is sung by a child. “You’re ruining your reputation and I can give you two big reasons why.” Nice double entendre. We then move on to someone (possibly on drugs) being chased through an enchanted forest, to another poor soul paralyzed in a car crash, and then to a song about firefighters and getting burned.
Record curator Tim Warren really dug deep here. In my research, most of the featured artists on the record have only released one or two 45’s. In short, obscurity abounds.

Discriminating listeners might find the music on this record bad. Others will appreciate and be thankful that this is an honest-to-goodness thing that someone had the genius to record. And no one will disagree that this music does what country does best, striking at the core of feelings that we all share as humans. Murder? Maybe not but you get the point.
Listening to one over-the-top song after another, we share the trials and tribulations of those who exemplify country western the most- murderers, prostitutes, and drunks. This record has it all. If you like your music, weird, dark or country, check it out. It’s a treat.
Track list
Ramblin' Ed Bailey- 8 Weeks In A Barroom
Arkey Blue & The Blue Cowboys- Too Many Pills
Billy Ray- The Story Of Susie
Chuck Wells- Down And Out
Harry Johnson- It's Nothing To Me
Horace Heller- Ed's Place
Pierce Brothers- Death Row
Country Johnny Mathis- Caryl Chessman
Troy Hess- Please Don't Go Topless Mother
Hi Fi Guys- Rock&Roll Killed My Mother
Mohawk & The Rednecks- Enchanted Forest
Cal Veale- Paralyzed
Paul Barton- My Neighbor The Firefighter
Granpa Joe- The Drunken Driver
Eddie Noack- Dolores
Billy Barton- The Devil, My Conscience And I
Lum Hatcher- Behind The Fear
Ever since Meow got fired from his college's 5 watt dorm radio station in 1978 for cursing at the equipment, he’s had a lifelong dream of redeeming himself. KALX has provided that opportunity through Meow’s DJ work, flyering all around the East Bay, and occasional production hijinx.>
Replays of Various Pre-recorded KALX Programming
DJ Profile / Recent Show Playlists
1:00am to 8:00am
This Week's Schedule
> See More