The Breathing Room at Studio Q 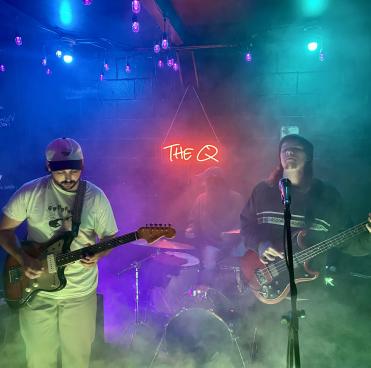 The energy was electric in Studio Q, a small, colorfully lit warehouse in West Berkeley. On November 6th, the venue held their first ever “First Saturday” event, featuring a fully packed lineup of six different acts ranging from alternative rap to progressive indie pop. Despite following such a daunting lineup, headlining act and up-and-coming Berkeley indie rock quartet The Breathing Room surely stole the show, captivating their audience with their synthy jazz-infused set. Having seen them twice before, The Breathing Room once again delivered a stellar performance, transporting the listener to their mellow universe of otherworldly neo-psychedelic indie rock fusion. 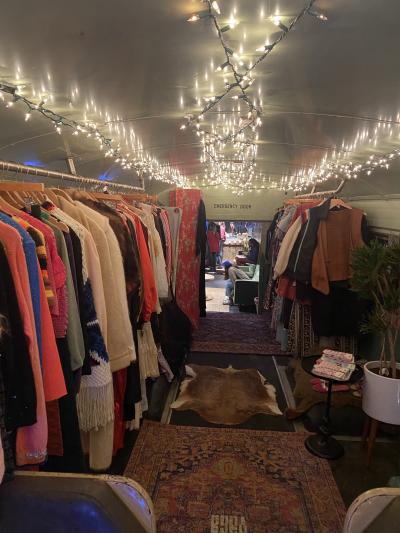 Nestled in the heart of the Gilman District, the venue of Studio Q appeared as eclectic as the audience it attracted. Vintage clothing storefront by day and independent music/art space by night, Studio Q attracts a wide variety of eccentric artists and creatives. The venue was quick to wow attendees by having the audience enter through the back of a retro schoolbus decked out with vintage clothing, artwork, and knick-knacks. Once inside, attendees were invited to dance, drink, socialize, and enjoy the lively ambiance provided by a powerhouse of talented acts such as Monk, DJ Gushy, Marquito, April Flowers, and Is Our Children Learning. 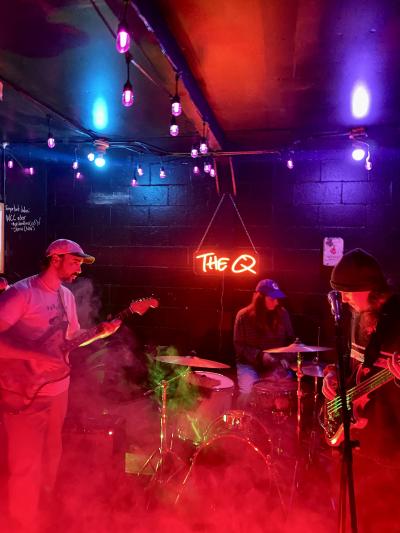 As the final supporting act drew to a close and the night steadily crept past 11 PM, energy within the crowd began to dissipate. Either too drunk or not drunk enough, the crowd had fallen into a drowsy, mellow stupor. For most artists, an audience so languid could be seen as an issue. However, for a band like The Breathing Room who describes their sound as “atmospheric psychedelic soul,” this seemed to compliment the ambiance in an even more appropriate way.

As The Breathing Room finished setting up their instruments, bassist and vocalist Sean Spangenberg announced that they’d be playing some unreleased songs, teasing their upcoming album release expected in 2023. It wasn’t until the opening chords of the first song (an unreleased track), “Low Lights,” that the crowd came to attention. Idyllic and pleasantly woozy, The Breathing Room’s dreamy guitar tones and synth-driven melodies proved intoxicatingly hypnotic, captivating the attention of everyone in the room. With each melty melody, The Breathing Room mesmerized the audience into a blissful trance. The crowd swayed to the airy, ethereal chords of their most popular song, Opaque, as well as Bright Skies, Dusty, and Lemon Honey. Peaceful, atmospheric tones and twinkling synths gave The Breathing Room’s set an ethereal, dreamlike quality. Bathed in multicolored light and thick haze of fog, even the band itself resembled something of a surrealist vision.

Much akin to artists like Mild High Club, Homeshake, and Michael Seyer, The Breathing Room did an excellent job channeling feelings of hazy, dreamlike euphoria into their music while still incorporating their own unique musical sound. Drawing influence from jazz, soul, and classic rock, The Breathing Room achieved a spectacular feat in seamlessly fusing a plethora of genres to form their own fresh and innovative amalgamation of modern psychedelia. 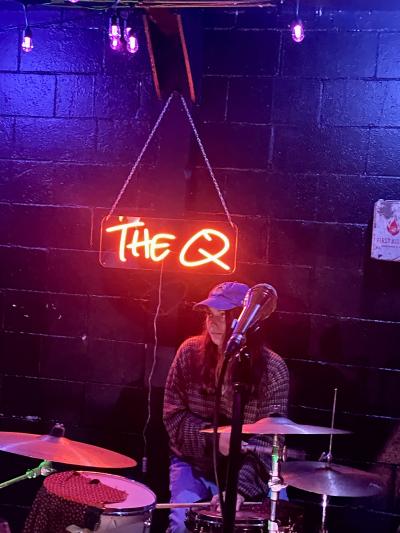 Guitarist and vocalist Garrett Barley’s evocative guitar solos in songs such as “Peace Dream” and “Day Trip” provided a bluesy, classic rock infused edge to the performance, brilliantly contrasting the atmospheric dreamlike nature of many of their songs. Let me make one thing clear: As a guitarist, Barley does not play around! Barley consistently delivers shockingly powerful guitar solos both expressive and emotional, often leaving audience members in awe. Lengthy and full bodied, Barley’s solos are authentically classic and timeless in nature, often comprising the emotional and musical apex of the song. Following Barley’s solo on “You’ve Got a Hold On Me,” one member of the crowd appeared genuinely taken aback, turning to their friend and mouthing an inaudible, awe struck “Holy shit.” This reaction seemed standard at The Breathing Room shows. At a previous show, I had a friend plainly state “I think that may have been one of the best guitar solos I have ever heard” following Barley’s performance.

While Barley’s outstanding guitar solos occasionally command undivided audience attention, his talent did not overshadow that of the other members of The Breathing Room. The band appeared to function as a harmonious collective, with each member proving integral in constituting the unmistakable sound and feeling of the music. The unique musical styles of drummer Tori Leonhardt, bassist Sean Spangenberg, and pianist Caleb Phair continued to assert clear stylistic influence over much of the band’s set. Leonhardt’s light and buttery percussion helped set the tone of the laid back, effortless nonchalance that characterized much of The Breathing Room’s performance. Relaxed, slinky basslines by bassist and vocalist Sean Spangenberg further encapsulated the band’s calm, cool, and collected aura. Phair’s soulful, free-flowing, improvisational keyboard solos reminiscent of classic jazz acts like Oscar Peterson emphasized the strong jazzy undertones present within their music.

With minimal theatrics and limited audience interaction, The Breathing Room made no attempt to play to the crowd. No frills, excessive embellishment, or revelry; Just four people playing music they truly groove to. Seemingly indifferent to the crowd, The Breathing Room appeared to play music out of pure passion. In watching their performance, it became remarkably clear that Barley, Spangenberg, Leonhardt, and Phair shared a deeply sincere connection with their music, giving their set a cozy and personal feel often difficult to find in live performances. 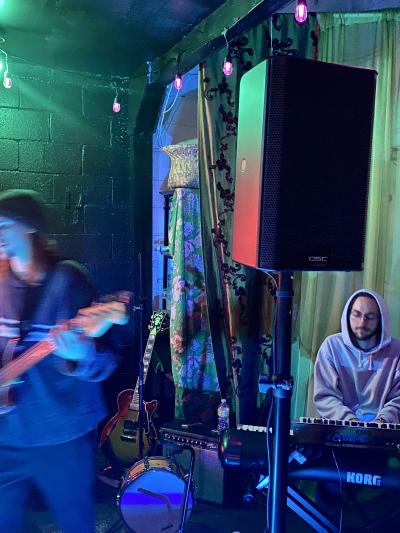 Upon the audience’s request for an encore, The Breathing Room closed out their set with one of my favorite songs, “You’ve Got A Hold On Me.” Finishing their set at nearly midnight, The Breathing Room’s hazy, atmospheric set was exactly what the audience needed to end the night. Both warm and nostalgic, their music proved a healing remedy for exhausted attendees after a long day at Studio Q. Giving the audience an experience they will not soon forget, The Breathing Room’s soulful, intimate set offered a psychedelic lullaby pulling the audience into a surreal, otherworldly dream realm. Both technically skilled and heinously creative, The Breathing Room delivered a spectacular performance and I greatly look forward to the release of their album in 2023.
NEW MUSIC FRIDAY
DJ Profile / Recent Show Playlists
8:00am to 9:00am
This Week's Schedule
> See More