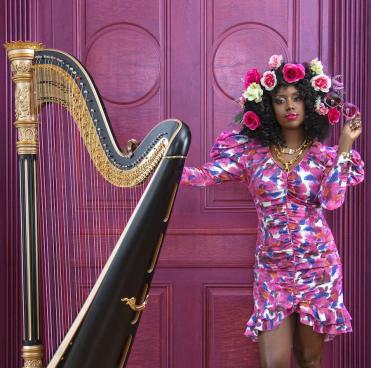 Carrying on and expanding the tradition of pioneering jazz harpists Dorothy Ashby and Alice Coltrane, Brandee Younger made her public debut in 2007 as a grad student at NYU, when saxophonist Ravi Coltrane enlisted the then-23-year-old to participate in the memorial service for his mother Alice.

A student of jazz great Jackie McLean, Younger has collaborated with artists from the worlds of jazz and hip hop, including Jack DeJohnette, Charlie Haden, Pharoah Sanders, Lauren Hill, and Common.

In 2021, she released her Impulse! Records debut, Somewhere Else, which earned Younger a Best Instrumental Composition GRAMMY nomination for the track “Beautiful is Black.”

Brandee Younger performs at SFJAZZ on Monday, June 13th in a trio with master musicians Dezron Douglas on bass and Marcus Gilmore on drums.