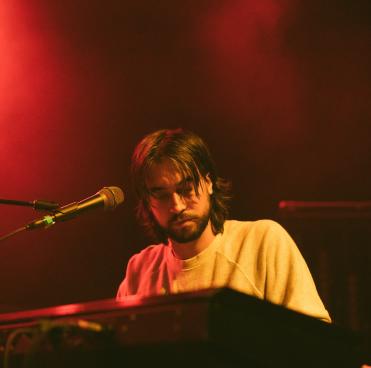 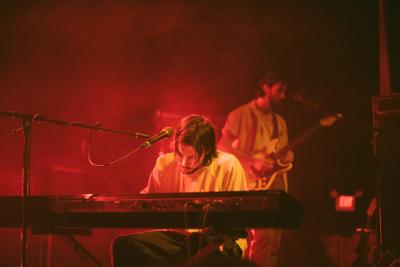 On October 19, Alex Giannascoli (known by moniker Alex G) played a sold-out show at The Fillmore in San Francisco, with Australian singer-songwriter Hatchie as the opening act. Giannascoli was touring his newest album “God Save the Animals,” released Sept. 23 through Domino Records, which has seen significant criticism from fans and non-fans alike. He’s said it’s not a concept album but much of the lyrics seemed to follow a religious theme, which is a large tonal shift from less serious and personal-feeling past projects, and seems to represent a new direction which his future music may take.

His growth both as an artist and in his personal life is apparent in the lyrics of the new songs, specifically “Miracles,” a track where he contemplates settling down and starting a family. If Giannascoli is fatigued with the music industry and his infamously demanding fan base, it wouldn’t be without reason. The new record is the ninth project he’s studio-recorded and put out on a label, but his expansive career has included several more unreleased albums and a full vault of unrecorded tracks. Part of the culture around his music is the layers of obscurity around deep-cuts which only exist on BandCamp or YouTube which becomes a competition on who knows the most unreleased tracks. And this mythological culture around Alex G is palpable in the crowd culture at his shows, although this show at the Fillmore felt significantly better than the last time I saw him live, in terms of crowd conduct and respect towards him. 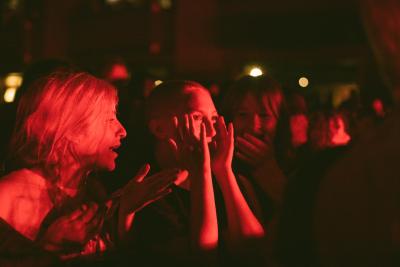 Opener Hatchie took the stage shortly after 8pm and played about a half-an-hour set, which was mellow shoegazey music not unlike something the Cocteau Twins might have made. The connecting theme between Hatchie and Alex G perhaps is the general incoherability of their lyrics, although the overall sound of Hatchie was significantly warmer than the main act.

For the main set, Alex G started with “S.D.O.S,” which is the fourth track off his new album “God Save The Animals,” which is a dark instrumental number intermixed with cryptic lyrics with overt religious themes. Despite studio intervention since the first several albums he self-produced and put out, every song still feels self-mixed in its dischordance, which was definitely replicated live. While I think his darker music is interesting, sometimes I find that it loses me because it’s hard to focus on what he’s saying.

Giannascoli then launched into “Runner,” which was a single off the new album, and the most streamed track from it thus far. He moved from the keyboard to guitar where he began his signature lurching back and forth across the stage. Next was “Hope” off of the House of Sugar record, which was clearly a crowd-favorite, and I really enjoyed.

Alex G’s signature is chords whose rhythms are so complex that they themselves sound like lyrics. You can sing an Alex G chord progression and have it be more recognizable to his fans than the words of the songs themselves. Nowhere is this more apparent than his song “Mis,” one of the oldest tracks he played, where the chorus is a call-and-response type where Giannascoli sings “I said I miss you so bad, she says” and then plays a melancholy guitar riff, vocalizing along with each note. The live performance of this, along with another old track he played “Bobby,” were both significantly stripped back. The latter track was missing its signature violin backing which Giannascoli used liberally on the “Rocket” album it’s from. This felt like a clear sign that he’s moved away from certain types of instrumentation. 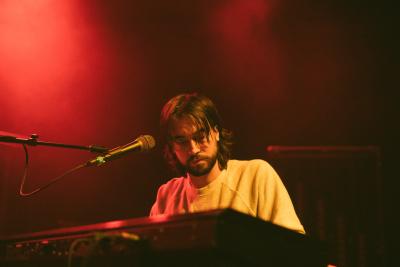 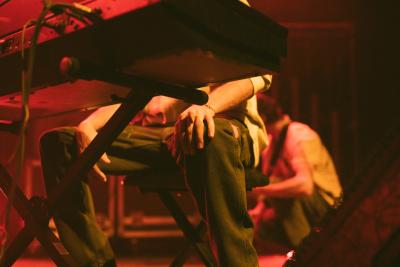 He notably played nothing from the pandemic release “Race,” which is actually one of his more critically acclaimed albums and a favorite of mine. This might be because it was initially recorded way back in 2010 but just recently put on streaming services, and therefore may fall under the umbrella of old music he’s trying to distance himself from.

“No Bitterness” was a track that I liked significantly more after hearing him play it live, the second half of the song really explodes into an ambient autotuned soundscape with thumping bass.

On “Blessing” he hunches over the microphone with a hand on his back and drags himself around the stage whispering the chorus “every day / is a blessing.” He then play-tousled with his guitarist and long-time musical collaborator Sam Accione, a friend from middle school. The two men are close to being doppelgangers, so much that when Sam initially got on stage, the crowd cheered mistakenly thinking he was Alex G. 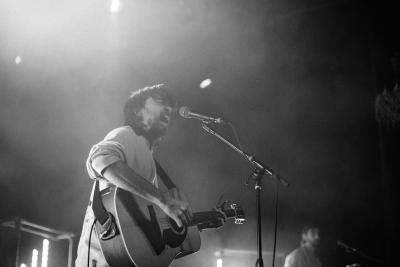 Giannascoli’s lyrics are absurd and silly in their simplicity – he’s been known to take on personas from album to album and assume identities for songwriting. This was something I’d never really thought about before he played “SugarHouse” during his encore to a relatively silent crowd except for me and the 30-something man next to me shouting “Baby I’ve been a good boy” along with him on stage. Something about the story he constructs within his songs feel elaborate in their raw emotional vulnerability, and that has remained consistent on the new album, if maybe it’s a little hidden under several layers of autotune. 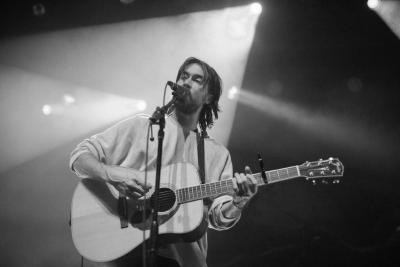 On “After Yr Gone,” he leans into the forced kind of singing which is audible on recorded tracks but more visibly apparent when you’re watching himlive – he sings through clenched teeth in a way that feels like he’s afraid of the crowd in front of him. His stage presence is enigmatic in a way that borders upon rudeness (the first time I saw him live he didn’t address the fact that there was a crowd swaying in front of him hanging onto his every word for the first forty minutes of the show). Bouncing between instruments, avoiding eye contact with fans, and obviously tipsy, Giannascoli has a cool guy persona on stage which frustrates the rows of fans struggling to make personal contact with him – shouting out requests for songs or for him to “shake that ass.” Perhaps he’s fallen victim to a specific kind of personification on the internet that Mitski, Phoebe Bridgers, Clairo and countless other indie darlings have suffered, which on their post–COVID hiatus tours have allowed them to sell out and pack venues, but not without the cost of a new, clearly young crowd which largely lacks concert etiquette or seems to be aware of the fact that they are heckling a real person. 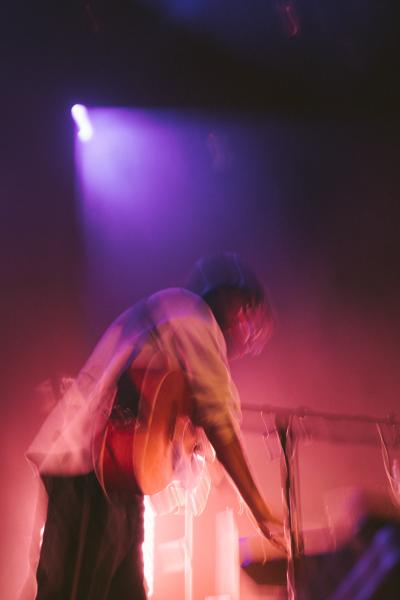 I was bummed that there were songs I didn’t get to hear him perform, but I think that probably speaks to what a large and impressive body of work he ultimately has. Giannascoli takes requests for encores at most of his shows, and it’s probably true that he could be up on stage for two hours playing what people are shouting at him to play and not get through every request. Although his big TikTok hits like “Mary,” “Sarah,” and “Gnaw” were noticeably missing from the encore, he seemed to address it when he performed “Sportstar,” the chorus of which goes “I play what I wanna play / I say what I wanna say.” 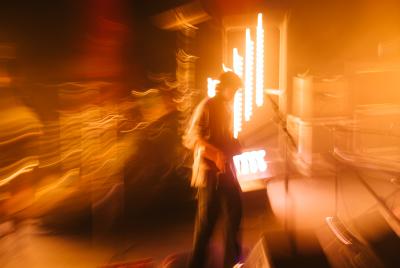