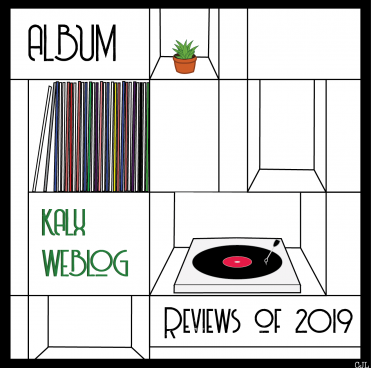 With hundred of albums circulating through the station every week, the ones that stay get reviewed by volunteers before they make their way onto the airwaves. 2019 brought us an incredible wave of new music, along with reissues that remind us that some records are not to be overlooked. KALX volunteers Chandler Le Francis and Keesan Nam discuss 3 albums they enoyed from the past year in detail below:

Wonder what it takes for an album earn a spot on the KALX Top 35? Check out our album review for one of the most played records in February, Unseen Worlds.

The unlimited capacity of music discovery can be a double-edged sword. While we’re able to access records and artists from around the world, we sometimes lose the work of artists who revolutionized music. Laurie Spiegel was one of those artists: after releasing pioneering electronic albums The Expanding Universe and Unseen Worlds in 1980 and 1991, the records fell into obscurity. Luckily, they’ve been pulled out of the void. Both have since been reissued by Unseen Worlds Records, and 2019’s Unseen Worlds has triumphantly taken the #1 spot as February’s album of the month at KALX.

Spiegel’s journey in creating this work is as fascinating as the album itself. Once a programmer at Bell Laboratories and no longer having access to the GROOVE System she used to compose Expanding Universe, she developed the Music Mouse software on a Macintosh 512k. The result is an electronic classical album that is both familiar and otherworldly; simple and complex. Above all, it acts as a precursor to the electronic sounds we know and love today.

The album is characterized by its vacillation between dark, eerie ambient noise and calming synthetic washes, sometimes all in the same song. Within the first few seconds of “Three Sonic Spaces I” you’re already transported elsewhere. A deep, low droning pervades the music, with metallic tones coming and going, like a gong that’s been chopped and screwed. “Three Sonic Spaces II” carries that eerie feeling, this time using a modulation reminiscent of a classical guitar. As the notes pick up in tempo, their echoes build over time. This moves into “Three Sonic Spaces III,” which also uses a strings-esque modulation that builds over time, sputtering and flickering. “The Hollows” best characterizes this dark, atmospheric sound: with deep droning washes in conjunction with a high-pitch, I had a very visceral reaction to this song. I had goosebumps, could feel my heart rate quicken, and I felt the need to walk around. At times filling me with unease and wonder, I couldn’t help but commend Spiegel for her ability to create these moody soundscapes.

She also balanced out these noisier compositions with lighter fare. “Finding Voice” was a favorite of mine — once again using a harp sound and aided only by a faint feedback, she plays scales where their echoes linger to create new soundscapes. “Two Archetype: Hall of Mirrors - I” also helped to assuage those feelings of angst and unease, with layered organ-esque sounds. Reminiscent of György Ligeti’s work on 2001: A Space Odyssey, it also had an otherworldly feeling. “Two Archetypes: Hurricane’s Eye - II” then starts out with bold and layered tones, exploding with sound and texture. It’s a sensory explosion, challenging the listener to hear it all in cohesion.  “Strand of Life” and “From a Harmonic Algorithm” were also lovely interludes, with calming, simple scales in soft, synthesized bliss.

Unseen Worlds finds these distinct songs all converging in its conclusion, “Passage.” In 14 minutes, Spiegel ties together all of these sounds for an explosive odyssey. The low droning returns, building to a deafening hiss while gong noises provide some differentiation. After a quick sequence of scales, it transcends to a chorus of sorts, wavering in and out of the noise, then fading out gently into feedback.

Laurie Spiegel somehow embodies the chaos of organic instruments and the precision of computers on Unseen Worlds. She is able to show the capacity for computer instrumentation and for creating moods and worlds through electronic music. While it was at times literally frightening, it truly was a wonder to hear. It doesn’t make for easy listening, but it is vital in the realm of ambient, electronic composition, and difficult composition. It’s a world we should all see once in a while.

Chandler majored in Media Studies and graduated from Cal in 2016. She is occasionally on air as DJ Hella Bent.

Denoted as a "mixtape" rather than a proper album, it was natural to expect Angel's Pulse to be a little bit rough around the edges, but what we got was still some excellent Blood Orange sounds. The album is somewhat of a musical sketchbook in that it throws out a ton of different ideas, but doesn't always follow up with them. A lot of the tracks are sub 3-minutes and could stand on their own as singles or b-sides; I like to think of  Angel's Pulse" as Blood Orange's Sad Sappy Sucker (a complement of course!). Nonetheless, Blood Orange stays true to their R&B core, mixing it up with occasional rap features and flashes of dream pop/neo-psychedelia.

I love Devon Hynes' vocal harmonies and sequenced drum beats on tracks like "Dark & Handsome" and "Tuesday Feeling," and the tracks that break up the romantic R&B vibe that the album at times settles into, like "Gold Teeth." We won't call it Negro Swan's sucessor, but it's a Blood Orange release you won't want to miss.

21-year-old singer-songwriter Clairo, dropped her debut album, Immunity this fall on New York-based label Fader, and decided to send it "North," that is, to northern California, for us KALX DJ's to play on the airwaves, becoming the 3rd most played album in the month of September.

The album is packed with solid pop tunes featuring Clairo's clean and serene vocals over soft melodies on a chorus guitar and piano. The songs range from low to mid tempo for an overall chill vibe, but I must say that my favorite tracks are the more high energy ones, like "North." Clairo experiments with a little bit of distortion here, but blends it with a clean chorus-guitar riff and an old-school hip-hop-esque drum beat. "North" makes for an awesomely textured track.

As a whole, the album sets-up a groovy first half with some noticeable dream-pop influences, and mellows out in the latter half, showing hints of R&B. For me, it's a 7.5/10.