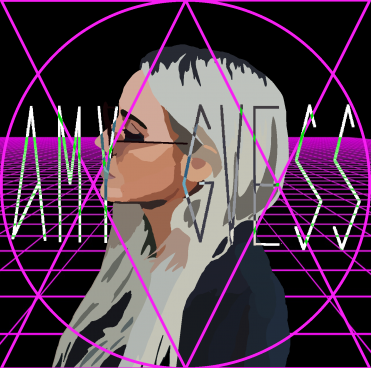 Las Vegas native Amy Guess is a synth-pop electronic artist with music that has potential to be heard on commercial radio. Possessing the star quality of a stage singer, Guess could very well open for acts like Ellie Goulding, Ariana Grande, Halsey, or Pink. Shaping her music with tales of bad romance, her debut EP 10 Times Out of 10 is definitely 10/10 worth listening as Guess pours her heart and emotions into her songs. Guess states via Facebook, “Every experience makes my music more honest and alive.”

Although another pop album about break-ups sounds too much like Taylor Swift, Guess is different. Though she might channel singers such as Kylie Minogue and Cascade into her style, her intimacy and authenticity in her singing/songwriting speaks to everyone who's found love or dealt with heartache. Despite being a freshly new performer, Guess sounds like she has been singing for years and comes off naturally. What catches my ear about Guess is that she is not afraid to test a variety of genres and styles in her music. How she incorporates pop, electronica, and a vogue from a different decade is impressive to listeners and musicians.

Her five-track album sounds like it could be featured in a dance night club with its EDM textures. Guess’s video for “10 Times Out of 10” embodies an 80s vibe with its neon-noir lights of pinks and blues. Throughout the EP, heavy synths complement Guess’s vocals, creating that iconic 80s rhythm. Guess has such an expressive emotion to her lyrics that listeners can’t help but experience her feelings too. Relationships and breakups are the present themes in the EP, which is a relatable subject to many.

For example, in concluding song “Like I Do You,” Guess sings of unrequited love: “Am I a fool to fall for you?/ It’s so addictive.” Each track Guess expresses a different feeling of remorse, anger, and longing. In her song “Think of Me,” Guess ponders if her ex-lover ever wonders about her and questions herself. And then later, Guess sings “Comatose” as a triumphant anthem in an ending relationship. Accompanied by pounding drums with an overall edgy rock style “Comatose,” could be a battle ballad for torn relationships. In another track “Without You,” Guess sounds like she is begging for her ex to return to her with a sigh of regret in her voice.

The entire album addresses Guess’s passionate love and its failures, but it also concludes to never abandon a hope for happy endings.

Favorite tracks: “10 Times Out of 10,” “Think of Me,” “Comatose,” and “Like I Do You.”
Amy Guess is currently on an East Coast tour with Aaron Carter.