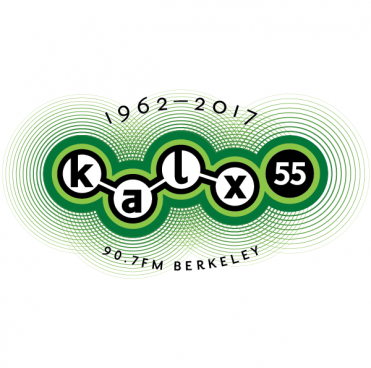 KALX 90.7 FM is proud to announce its 55th anniversary celebration!

From its 1962 cigar box beginnings airing music to the dorms, KALX has become a renowned radio station heard on the air at 90.7 FM in the SF Bay Area and online at kalx.berkeley.edu. For 55 years, the station has been loved for its freeform, eclectic, and curated sound. Get a more in-depth look at KALX's journey by checking out the Full and Unabridged History.

Specialized programming and promotions will include:

Chompin’ on the Charts: Airing every Tuesday in October @ noon, the show will feature music from the charts of every decade since KALX began broadcasting.

Station Stories: Beginning in October, this online campaign will showcase alumni and listener memories of KALX throughout the years, and encourage community members to share their own using the hashtag #StationStories.

Blast from the Past: Tune in on Saturday, October 21st from 9AM to 5PM to hear former KALX DJs return to the airwaves!

KALX Rewind: Every Tuesday in November @ noon, we'll be playing excerpts from live concerts in the Bay Area that KALX has recorded throughout the years.

The Return of Cabinet Tapes: Tune in every Saturday in November @ 11:59PM to hear archived live performances in the KALX studios from our digitized reel-to-reel tape collection.

KALX in the News:

KALX Radio: Remaining true to its independent spirit for 55 years — The Daily Californian